Are atheists smarter? How do white evangelicals vote? And other questions from this week's religion news.
Compiled by Susan Wunderink|June 13, 2008
News Quiz
What the Pope Left Behind

Bryan Litfin, author of Getting to Know the Church Fathers, says that we need to reclaim our spiritual heritage.
Susan Wunderink|August 08, 2008
News Quiz
Fire and Dating

Name that nonprofit, Mike Huckabee's biblical blunder, and stem-cells make an organ.
Compiled by Sarah Pulliam and Susan Wunderink|November 21, 2008
Interview
Q & A: Frank Wolf on Liberty for the Captives

Christian homes burning in eastern India ... again. Also: Do men with jobs reduce abortion? How do you prove "nuns are — above all — women"?
Compiled by Susan Wunderink|August 29, 2008
News
Trying to Reform the United Nations from the Inside

But ruling allows the ministry to continue operating without returning $1.5 million to the state.
Susan Wunderink|December 04, 2007
News
Enns Explains

The professor offers his response to the criticisms that got him suspended from Westminster Theological Seminary.
Susan Wunderink|June 09, 2008
News
'How Much Time Should She Serve?'

Kyiv pastor Sunday Adelaja believes the world is his parish.
Interview by Susan Wunderink|October 17, 2008
How to Out-Jesus Rick Warren 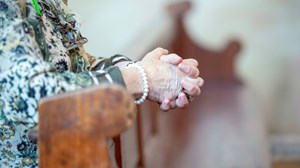