Obama also wanted to clarify the relationship details. "He was never my 'spiritual mentor.' He was – he was my pastor. And so to some extent, how, you know, the – the press characterized in the past that relationship, I think, wasn't accurate." It's interesting that he makes this distinction for someone who guided him through his marriage, his children's baptism, and prayer for the campaign.

Wright has caused a lot of chaos for the Obama campaign for the last several weeks. On Monday, Wright appeared at the National Press Club in Washington, D.C. and fueled the fire. 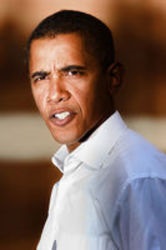