AP is now reporting a release order for Philip Rizk has been issued but not yet implemented. AP credits this to international media pressure. CT readers would credit international prayers as well....

Christianity Today news has learned that Philip Rizk, a well-known blogger, journalist, grad student, and activist currently based in Cairo, is reportedly being held by State Security Investigations officials in Sadr City, a northern suburb of Cairo (see also here and here). His sister reports that police came to the Rizk household at 1:30 a.m. this morning searching for evidence related to Philip's activism and attempted to take Philip's father Maged with them. They left empty-handed at 5 a.m.

On Friday, Feb. 6, Rizk was present during a protest march focusing on the situation in Gaza. Apparently, others were also taken into custody, but have since been released.

These details are just emerging and not independently confirmed as ... 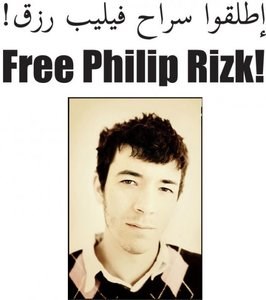