Rooster Cogburn is about to get an overhaul. John Wayne played the iconic character in the 1969 film True Grit, for which he won his only Oscar. Now Jeff Bridges is stepping into those shoes in a Coen Brothers remake, coming to theaters on Christmas Day. The Dude channels the Duke, whaddaya think of that?

Here's the first full image from the new film – Bridges as Cogburn, and 14-year-old Haile Steinfeld as Mattie Ross: 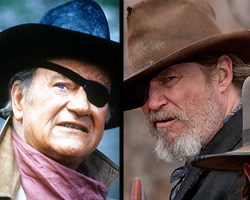