The Obama administration's nominee to oversee international religious freedom returned to Capitol Hill on Tuesday in her second bid to charm senators who have doubts about her lack of experience.

"The life and professional background I offer to this position are unique," the Rev. Suzan Johnson Cook told members of the Senate Foreign Relations Committee.

"I've brought people of different faiths together to achieve common objectives, including religious freedom and respect for people of all faiths and beliefs." 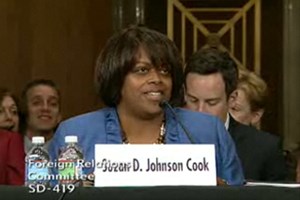 Cook was initially nominated for the long-vacant post of Ambassador-at-Large for International Religious Freedom last June but her nomination lagged in the Senate and expired in December.

President Obama renominated her in February as critics complained the longtime vacancy reflected the administration's low priority for the issue.

Sen. Jim DeMint, R-S.C., who was one of the lawmakers who had questioned Cook's lack of direct experience, cited "indications" she still lacks qualifications for the job.

"I am concerned about a person in this position having the passion, the courage and the boldness to deal with this issue," he said in his opening remarks.

Sen. Kirsten Gillibrand, D-N.Y, who introduced Cook, assured DeMint that Cook, a New York minister, could do the job.

"She will not only astound you, she will very much fit the bill," said Gillibrand, who called Cook "a leader in bridging faith and public service."

The Baptist minister known as "Dr. Sujay" retired in 2009 as pastor of Bronx Christian Fellowship Church, which she founded in 1996. She was the first woman elected to lead the prominent Hampton University Minister's Conference of black clergy.

"In my travels I have found that my experience as an African-American woman and faith leader has enabled me to identify with other minority communities, both religious and ethnic," she said.

Sen. Barbara Boxer, D-Calif., who chaired the hearing, congratulated Cook on "a wonderful resume and a very strong presence." Sen. Robert Menendez, D-N.J., said he would have voted for Cook the first time around but is ready to vote for her now.

"You will be a strong advocate and not a shrinking violet," he said.

In response to questions, Cook ticked off a range of religious freedom challenges across the globe, including assassinations of Pakistani officials who opposed the country's anti-blasphemy laws and discrimination against Coptic Christians in Egypt.

Asked how she would help Iraqi Christians, Cook talked about working with military chaplains already familiar with the situation.

When committee members questioned whether the State Department's Office of International Religious Freedom has the resources to tackle an issue that inflames so many international conflicts, Cook defended the team of 20 civil servants and Foreign Service officers.

"They're just missing an ambassador-at-large to complete a strong team," she said.