Cost-sharing ministry is still operating in Kentucky more than a year after a state court ordered it to stop.
Allison J. Althoff|July 5, 2012 04:22 PM

(Note: This post has been updated to clarify that Medi-Share serves 50,000 people in 49 states, members commit to not abuse alcohol, and operational changes were made prior to the state Supreme Court ruling.)

Lawyers for Kentucky's Department of Insurance are encouraging a judge to hold Medi-Share, a cost-sharing ministry that helps pay medical bills for Christians who don't smoke or abuse alcohol (among other qualifications), in contempt for continuing to operate in the state more than a year after a circuit court judge ordered the Florida-based group to stop until it meets Kentucky insurance regulations.

The Kentucky Supreme Court ruled in 2010 that Medi-Share, which currently serves nearly 50,000 people in 49 states, offers a "shifting of risk" and thus shouldn't be exempt from state insurance regulations. Franklin Circuit Court judge Thomas Wingate issued a permanent injunction against the ministry in March 2011; however, Medi-Share has continued to advertise on Christian radio stations ... 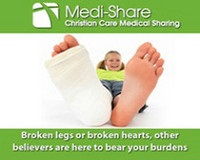