Williams retire at the end of 2012 to serve as master of Magdalene College in Cambridge.
Al Webb and Kevin Eckstrom, Religion News Service|March 16, 2012 01:30 PM

Archbishop of Canterbury Rowan Williams said today he will step down at the end of 2012, setting the stage for the unique process of government officials appointing the new leader of the worldwide Anglican Communion. 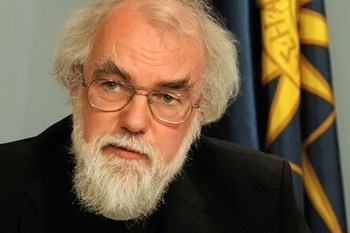 Williams' surprise announcement stunned the religious world, even as the short list of prospective successors swiftly began to circulate. Williams, 61, has led Church of England and the world's 77 million Anglicans since 2002.

Traditionally, the new leader is chosen by a church committee of Anglican clergy and laity, who then draft a short list of candidates to submit to Prime Minister David Cameron.

While Queen Elizabeth II is the Supreme Governor of the Church of England and formally appoints the archbishop of Canterbury, the decision is based on the final determination of the Prime Minister.

That process could be dogged by controversy. In the recent past, some Church of England reformists have cast doubt of whether a political figure should be involved in picking a spiritual leader for 77 million Anglicans around the world.

The odds-on favorite, according to numerous observers, is Uganda-born John Sentamu, the current archbishop of York and the No. 2 official in the Church of England. Sentamu, the sixth of 13 children, fled his homeland and its dictator, Idi Amin, in 1974.

Sentamu has gained a reputation in some circles as a "cleric of the people" for his actions, including cutting up his clerical collar on live television in 2007 to protest the rule of Zimbabwe strongman Robert Mugabe.

Another prospective candidate is Bishop of London Richard Chartres, who gave the address as the marriage of Prince William and Kate Middleton last year and has a record as a strong campaigner on environmental issues.

Other prospects include Bishop of Bradford Nick Baines, who has gained a reputation as a "blogging" bishop for his use of modern technology; and Bishop of Leicester Tim Stevens, leader of the Anglican bishops who sit in the House of Lords.

In a statement announcing his retirement, Williams said "it has been an immense privilege to serve as archbishop of Canterbury," and that "moving on has not been an easy decision."

Next January, Williams will serve as master of Magdalene College in Cambridge, returning him to the academic life that defined his early years and that he seems most comfortable in.

Williams is giving up is a tenure that has been plagued and occasionally scarred by hot-button issues such as same-sex unions and the threatened break-up of the English and global church over female and homosexual bishops.

Yet even as members of his global flock refused to follow his lead, Williams was widely respected as a calm and gentle leader and academic who perhaps was never had the stomach for the bare-knuckled fights in the church.

"We can all give thanks for his erudition and persistence in seeking reconciliation across a rapidly changing Anglican Communion," Episcopal Presiding Bishop Katharine Jefferts Schori said in a statement.

The cascading series of crises at home and abroad made Williams's job – and his life – a seemingly endless headache of embarrassments and disappointments ever since his appointment by former Primer Minister Tony Blair.

Williams worked desperately to prevent a global schism as the Episcopal Church in the U.S. ordained two openly gay bishops and allowed same-sex unions. Such steps, he warned, tear at the "bonds of affection" that keep the worldwide Communion as one.

Because Williams does not have the power of a pope to sanction dissident followers, Williams turned to the power of persuasion and symbolism. When he issued invitations to the 2008 Lambeth Conference of Anglican bishops from around the world, he refused to extend one to openly gay Bishop V. Gene Robinson of New Hampshire.

At the same time, Williams faced an insurrection on his right flank as influential Anglican bishops in the Third World dismissed him as irrelevant for not taking a harder line on Western liberals.

His attempt at compromise – an "Anglican Covenant" that would bind member churches that agree to its traditional tenets – has so far been met with tepid enthusiasm by conservatives who don't think it will work and liberals who say they will not be bound by outside interference.

Williams has warned that the Anglican Communion risks "piece-by-piece dissolution" if its 40 member churches can't agree on a common set of rules and beliefs.

And, in a Catholic-Protestant turf battle 400 years in the making, Pope Benedict XVI created a special structure for disaffected Anglicans in Britain and the U.S. to join the Catholic Church while still maintaining elements of Anglican liturgy.

While Williams and Benedict have a close personal friendship, the pope's move made him Williams appear powerless, and there was little he could do to stop the Vatican's overtures to conservatives.

As Archbishop of Canterbury Rowan Williams ...