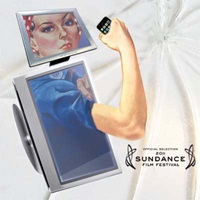 Jennifer Siebel Newsom's Miss Representation highlighted a group of strong, nuanced, and thoughtful films at the recent Women's Film Festival in Brattleboro, Vermont. A compelling, persuasive argument about how the media shapes cultural attitudes toward women to the especial detriment of girls, Representation avoids partisan politics—Condoleeza Rice and Nancy Pelosi both appear. It deftly mixes personal testimonies from women in the entertainment industry, interviews with academics and social policy makers, and young people who talk candidly (and often heartbreakingly) about how it feels to grow up in a sex-saturated culture.

Two short films, Angel for Hire and Eggs for Later, deal with the moral implications of fertility technology. Partially a biographical sketch of Noel Keane, the Michigan lawyer who drafted the first surrogacy contract, Angel is most interesting when it shows how implicit conflicts of interests between the prospective adoptive parents (who prioritize the life and health of the unborn child) and the surrogate mother (who may prioritize her own financial and health interests) when complications arise in a surrogate pregnancy. Eggs is a bit more introspective, in part because Marieke Schellart is both documentarian and subject. Thirty-five and single, Schellart hears of a new technology that allows women to harvest their own eggs and freeze them for later insemination and implantation. While most of Schellart's friends and family are supportive of her attempts to extend her fertility window, her father raises questions and concerns that she struggles to answer. Even if science could enable her to become pregnant after she has stopped ovulating, has she considered the consequences of pushing back not just pregnancy but motherhood?

Pregnancy also plays a key role in Maggie Betts's The Carrier, the story of Mutinta Mweemba, a Zairian woman who is HIV positive and terrified of passing on her virus to her unborn child. Betts carefully and dispassionately lays out the social and political conditions affecting African women and making it hard for them to protect themselves. Mutinta's marriage is polygamous; she claims her husband lied about already being married but her parents could not afford to return the wedding dowry. Even as she struggles to keep from passing the disease on to her own child, she faces fears of who will raise her children as one of her husband's other wives dies of the disease and the other faces an initial diagnosis.

Kenneth R. Morefield, a CT film critic, is the editor of Faith and Spirituality in Masters of World Cinema (Volumes I & II) and the founder of 1More Film Blog.