Nearly a year into her stint as the State Department's point person on religious freedom, the Rev. Suzan Johnson Cook has traveled to eight countries and seems to have moved beyond questions about her lack of diplomatic experience. 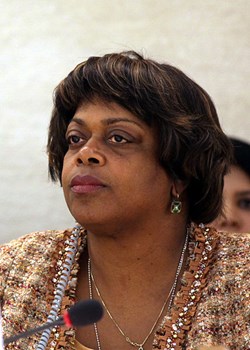 "I had to certainly learn the culture of the State Department," said Johnson Cook, the Obama administration's ambassador-at-large for international religious freedom, in a recent interview, "but I was not foreign to the issues."

She was in Abuja, Nigeria, not long after bombs killed dozens attending Christmas Day Mass. And she's been to Assisi, Italy, where she participated in an interfaith gathering organized by Pope Benedict XVI. But she still has many countries on her to-do list, including some of the State Department's hot spots.

Her initial plans for a February visit to China, which is designated as a "country of particular concern" for its religious freedom record, were halted when China denied her visa.

"We look forward to traveling and looking at a mutually agreeable time when it works for China and it works for us," she said, not addressing criticism that the incident made her office look weak.

"But we continue to press even before the visit. We're concerned about religious freedom efforts there, particularly registration of churches, the number of immolations that have happened."

From her top-floor corner office in the State Department, the first African-American woman to hold the post works with a 16-person team, who kept the office running during a long vacancy and Johnson Cook's own on-again off-again confirmation process.

"I got to believe that she will be a quick study, but still you've got a very complicated culture and not a whole lot of time," said Robert Seiple, the first ambassador to hold the post, who has met with Johnson Cook a couple of times.

In a bureaucracy where office real estate carries political significance, some observers question why Johnson Cook's office is placed within the department's Bureau of Democracy, Human Rights and Labor, and how much access she has to Secretary of State Hillary Rodham Clinton.

"I can't respond to everybody on the outside," said Johnson Cook, who noted that she traveled to Istanbul with Clinton last summer. "What I can say is that on the inside I have access, and the system works, and the structure works."

Religious freedom activist Thomas Farr, who was troubled about her lack of foreign affairs experience when she was appointed, now says, "I think she's done a pretty good job under difficult circumstances."

The office of the mother of two teenage sons is decorated with family mementoes, including her father's Bible on which she took the oath of office. On the walls are photos of her with Clinton in front of Istanbul's famous Blue Mosque and officiating at Coretta Scott King's funeral as four U.S. presidents looked on.

"It may not be the first time it's ever happened, but it's the first time that it's institutionalized," she said of the group that was launched last fall. "You see government and civil society beginning to work together."

Bill Vendley, a senior adviser to the working group, said Johnson Cook is helping to refocus the department's engagement with religious communities to address not only religious freedom and counterterrorism but also human rights and reducing violent conflicts.

"This is repointing the oceanliner," said Vendley, secretary general of the New York-based Religions for Peace, "moving the ship of state, recalibrating its compass bearing vis-a-vis religion."

Some religious leaders say Johnson Cook's previous role as a minister has prepared her well to be a public defender of religious freedom.

"Just listen to her and hear her speak and if you find a problem with her in terms of diplomacy, something is wrong with you," said Neville Callam, general secretary of the Baptist World Alliance. "If you find deficiencies in her fervor for religious freedom, you must be blind or deaf."

Nina Shea, director of the Hudson Institute's Center for Religious Freedom, praises the reports on international religious freedom that come from Johnson Cook's office. But she also has concerns.

Shea thinks its work on the so-called "Istanbul process" to address intolerance and discrimination against religion has inappropriately given the Organization of Islamic Cooperation an opportunity to claim it is partnering with the United Sates.

"It's strengthening their position," said Shea, who just concluded her term as a commissioner with the independent U.S. Commission on International Religious Freedom. "It's not strengthening ours."

"I don't take full credit for that," she said. "I think that I came in ... on a pendulum that's been swinging and now we're able to really put some action and get some traction on some of these issues."