University and local Episcopal church cooperate in a “win-win” agreement over campus zoning
Abby Stocker|June 28, 2013 08:20 AM

How about getting paid over $12.8 million to not build church-sponsored student housing? The deal sounded good to St. Stephen's Episcopal Church of Columbus, Ohio, where members received word this week that a June 12 property agreement with The Ohio State University was a go. 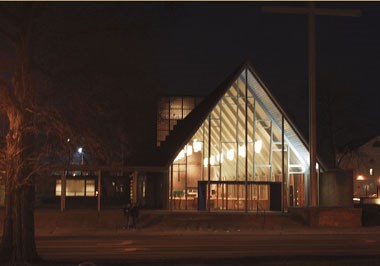 The Columbus Dispatchreported that as part of the agreement, the church will no drop its plans to build a 280-student apartment building on its property. The school also gets first dibs on purchasing any property the church might decide to sell in the future, the ability to offer input on future church projects, and the right-of-way to the street adjoining church property. The deal has been hailed as a "win-win" situation by St. Stephen's rector George Glazier, who noted that the church has had a "historic relationship" with Ohio State since the church opened in 1928.

In exchange for paying the church $7.5 million up-front—with yearly payments of roughly $213,000 for the next 25 years—and opening university parking for church events, Ohio State has the chance to implement, unhindered, its own plans to build 11 additional dorms in the area near the church. The university hopes that the new housing will improve retention rates and student engagement. According to the university's agreement, the church's plans "constituted a potential functional and aesthetic detriment to an important gateway into the surrounding campus area."

The church, which originally planned the apartment-style housing as a way to expand its community ministry, has not revealed plans for the funds beyond indicating that "a portion" will be devoted to its ministry for Ohio State students.

CT previously covered similar efforts by Kent Presbyterian Church to build a substance-free living facility for students of Kent State University. The facility, which was originally slated to open in fall 2011, has yet to break ground but is still a goal according to the church.