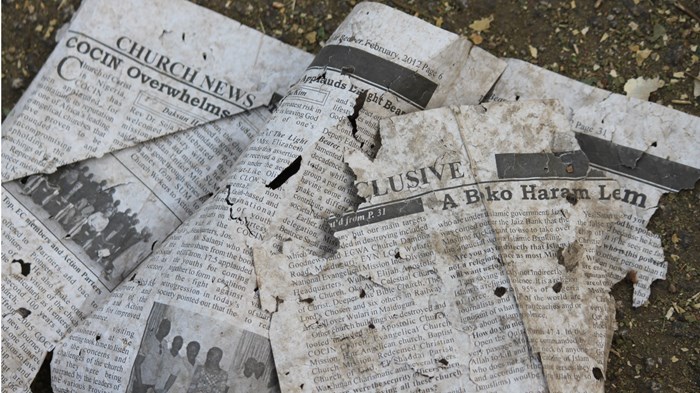 At least 30 people were killed last weekend after gunmen attacked worshippers and torched at least three churches in villages near Chibok in northern Nigeria, The Wall Street Journal and The Guardian reported.

Local residents blamed the terrorist organization Boko Haram, known for its attacks in the region, though the group didn't claim responsibility. More than 200 Nigerian girls kidnapped by Boko Haram are still missing.

The attackers destroyed Protestant Church of Christ in Nigeria, the Pentecostal Deeper Life Bible Church, and Ekklesiyar Yan'uwa (Church of the Brethren), among others, according to the Associated Press. In at least one case, the gunmen locked worshippers inside a church and opened fire on it. The BBC reported that six militants and nearly 40 civilians died in the attacks.

Boko Haram, which the U.S. State Department labeled a terrorist organization last fall, has claimed responsibility for almost daily attacks in the northeastern region of Nigeria. The AP reported the group killed more than 2,000 people this year alone and is responsible for 3,600 deaths in the last four years. The group's mission is to create an Islamic state ruled by Shari'ah law.

Nine people died on June 1 after Boko Haram gunned them down during a morning church service in Gwoza, a village two hours from Chibok, according to Christian Solidarity Worldwide. Reuters reported that more than 10 gunmen rode motorcycles into the remote village in the nearby hills. After they left, villagers killed four of the attackers and captured three.

Whether the attacks are religiously or politically motivated is up for debate. However, Christian Solidarity Worldwide quoted a 2012 video in which Boko Haram leader Abubakar Shekau said, "This war is not political. It is religious. It is between Muslims and unbelievers (arna) [sic]. It will stop when Islamic religion is the determinant in governance in Nigeria or, in the alternative, when all fighters are annihilated and no one is left to continue the fight."

Boko Haram isn't the only group terrorizing Christians in Nigeria. A Nigerian news source reported that more than 100 people were killed by unknown gunmen thought to be a group of renegade Fulani herdsmen in Kaduna State.

Sunday Ibrahim of the Christian Association of Nigeria called on the government to step up security and on local Christians to not take the law into their own hands, noting, "There was a time some of us did not believe that the killings in southern Kaduna have any religious connotation, but from the chanting, it has taken a religious dimension."

CT has monitored the terrorist activities of Boko Haram since 2010, when the group attacked churches over Christmas and killed six people. Since then, the group became one of the five most lethal terrorist groups in the world, responsible for the deaths of more than 3,000 people. Although Boko Haram repeatedly targeted Christians in church attacks, bombings, and school shootings, CT also reported that Boko Haram also murdered scores of Muslims.

Some Nigerian Christian leaders urged Christians to "turn the other cheek" in response to Boko Haram, even as the group made a concerted effort to convert Christians to Islam, or else they would "not know peace again." CT also explored how Boko Haram may have influenced the tactics of other terrorist groups, including al-Shabaab in East Africa. The International Criminal Court has investigated Boko Haram for its "crimes against humanity," while Christians also debated amnesty for the group.