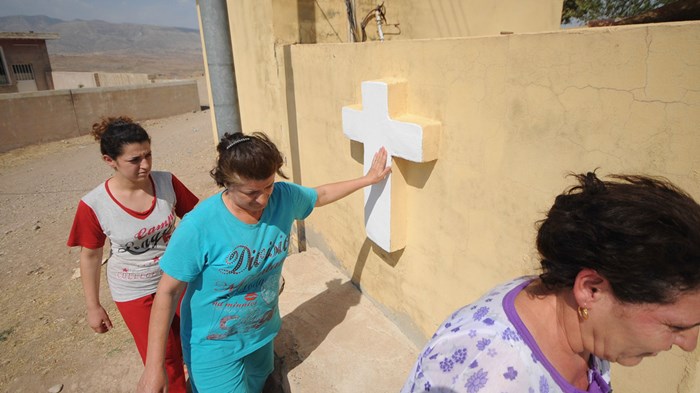 Fawzi Khalil recalls what he saw on a recent visit to Dohuk, Iraq. Refugees slept on streets and under bridges, fleeing the wrath of ISIS.

“It is very hard to coordinate with Muslims,” said the Egyptian pastor back at his Cairo church. “Everyone here is against everyone else.”

Khalil is the director of relief ministries at Kasr el-Dobara, the largest Protestant church in the Middle East. Since the fall of Mosul and the eviction of its historic Christian community, the Egyptian megachurch has distributed over 2,500 mattresses to both Iraqi Muslims and Christians. More than $300,000 has been raised—primarily from Egyptian Christians—to provide 2,200 families with medicine, a portable stove, and an emergency food package. The church sends a delegation to Iraq every two weeks.

“God is allowing ISIS to expose Islam,” said Khalil’s fellow pastor, Atef Samy. “They are its true face, showing what Islam is like whenever it comes to power.”

But the savagery of ISIS, which has overwhelmed Kurdistan with more than 850,000 refugees, has prompted other Middle Eastern Christians to embrace their Muslim neighbors. This theme was heard often from members of the Fellowship of Middle Eastern Evangelical Churches (FMEEC), who met in Cairo last month for a conference on the dwindling Christian presence in the region.

“We must be a voice for Islam,” said Munib Younan, bishop of the Evangelical Lutheran Church in Jordan and the Holy Land. “We must not allow the West to see ISIS, the Muslim Brotherhood, or others like them as the face of Islam.”

Others were more reflective of the diversity among both Muslims and non-Muslims.

“If you are an evangelical Christian who is Islamophobic, you will see in ISIS what you have been believing all the time,” said Mitri Raheb, president of the Diyar educational consortium in Bethlehem. “If you have Muslim friends living a different type of Islam, you will see ISIS as a deviation.”

But whether from sincerity or pragmatism, most said the answer to ISIS will come from other Muslims.

“The West will not come to your aid, and there is no Christian solution,” said Mogens Kjaer, general secretary of Danmission, a prominant Danish sponsor of evangelical initiatives in the Middle East. “Christians cannot save themselves. It is only the moderate Muslims who can help.”

For this reason, the Christians of FMEEC met with the grand sheikh of al-Azhar, widely considered the leading religious institution in the Sunni Muslim world. With Egypt’s prime minister Ibrahim Mehlab in attendance, Sheikh Ahmed al-Tayyib reassured Christians of their equal place in the region, condemned ISIS, and declared the caliphate itself to be no longer applicable in the modern world.

“The perpetrators of this kind of terrorism … are causing terror and fright and annihilating others in a savage way that history has never known before,” said Tayyib in a subsequent speech translated by al-Monitor. "It is painful to see that these inhuman crimes are committed … in the name of Islam, which is a merciful religion and peaceful among all people.”

Islam’s peaceful nature, however, would not be recognized by many Christians in southern Egypt, said Samy. The ISIS mentality exists in rural village settings even where the group itself has no representation, he said.

To combat this, Tayyib created the Egyptian Family House in partnership with the Coptic Orthodox Church in 2011. It is mandated to preserve Egyptian unity by seeking joint solutions to religious problems. The initiative has authority to present its recommendations directly to government ministers—and perhaps more importantly, to address problems at the grassroots level.

That’s crucial, because some parents teach their children that Christians are infidels, said Samira Luka, a Protestant leader who helped form the Family House chapter in Asyut, 200 miles south of Cairo. “So we must work with parents and teachers also to raise awareness about what it means to be Muslim and Christian in one country.”

FMEEC is also represented in Syria, where Riad Jarjour of the Arab Group for Christian-Muslim Dialogue has trained 35 young activists in peacemaking each of the past three years.

“The first meetings produced clashes and arguments,” he said of the Danmission-funded program. “But following the training they have become friends and are working together—Sunnis, Shia, Alawites, and Christians.”

Sometimes, though, talking isn’t enough. This reality has driven Syrian pastor Maan Bitar to urge his congregation to take up arms and fight. His Presbyterian congregation is among the 22,000 all-Christian residents of Mhardeh in Syria. Their city is besieged by Islamist militants.

Mhardeh is shelled every day, Bitar said, killing at least 50 civilians and injuring hundreds more. The city's Christians, alongside government forces, have so far been successful in preventing the militants from entering the city.

“I know I have the right as a human being to defend myself,” he said, “but I try to give my people a Christian justification.… Still, if I kill someone I need to say to Jesus, ‘I know I have sinned. I have not met your perfection.’”

Bitar admits the choice to fight is not necessarily correct for all Christians of the region. Bethelem’s Raheb sees several models emerging. Most Christians choose to emigrate, some to fight, and a few to pay jizia—a tax placed on Christians to guarantee their protection. Only a handful have converted to Islam.

“Ecumenical unity has never been easy, and will never be easy,” said Younan, the Jordan bishop. “ISIS does not care about our denominations, but ISIS does not unite us. Only Christ does.”