Catholics seem to be responding to Pope Francis’ encouragement to read their Bibles and pray on their own.
Sarah Eekhoff Zylstra|October 9, 2015 09:32 AM 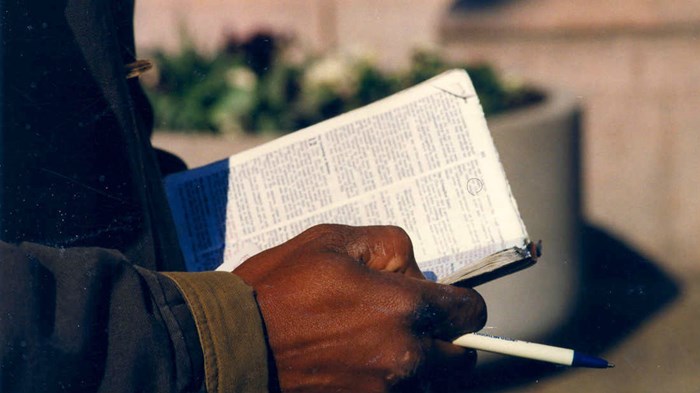 That’s especially true when it comes to prayer and the Bible.

“It is not for putting on a shelf, but rather to have it at hand,” Francis said of the Bible last year. “It is for reading it often, every day, either individually or in groups, husband and wife, parents and children; maybe at night, especially on Sundays. That way, the family can move forward with the light and the power of the Word of God!”

The Vatican has worked to increase scripture distribution under Francis, the American Bible Society (ABS) said. In the last year, according to ABS, the Vatican distributed thousands of copies of the book of Mark in St. Peter’s Square. Last week, half a million copies of the book of Luke were handed out during the World Meeting of Families in Philadelphia. And the United States Conference of Catholic Bishops has designated November 15–21 as National Bible Week.

The pope has also called on Catholics to add a personal touch to their prayers.

“The Lord tells us: 'the first task in life is this: prayer,'” Francis said two years ago. “But not the prayer of words, like a parrot; but the prayer, the heart: gazing on the Lord, hearing the Lord, asking the Lord.”

“I tell Jesus what comes to my mind to tell him,” he added.

And indeed, the way Catholics pray is also looking a little more personal.

According to Pew Research Center:

The pontiff has encouraged Catholics to seek God for themselves, historically a Protestant view.

“The human heart searches always for prayer, even without knowing it; and if it doesn’t find it, doesn’t have peace,” said the pontiff at the Vatican in August. “For this encounter you need to cultivate in your heart a ‘hot’ love for God, an affective love.”

Two in ten (22%) Catholics who have heard of Francis said he’s caused them to make changes to their spiritual life, reported Barna in September. That’s up 10 percentage points from last year.

It’s just slightly lower than the number of Protestants (23%) familiar with Francis who said he influenced their spiritual life, a number that has leaped 19 percentage points from 2014.

Overall, Francis remains as popular as ever, Pew Research Center found. His approval rating is 68 percent, up four percentage points since June and down two from February.

That bump is coming primarily from non-Catholics: two-thirds (65%) of them now approve of Francis, up from 58 percent in June, Pew said. That includes a 60 percent approval rating among white evangelicals.

Protestant pastors also are impressed with Francis. Sixty percent say he’s a brother in Christ, according to Nashville-based LifeWay Research.

CT keeps an eye on Pope Francis, noting his enormous popularity, his papal encyclical on the environment and how many of his fans disagree, and his apology to the “first evangelicals.”