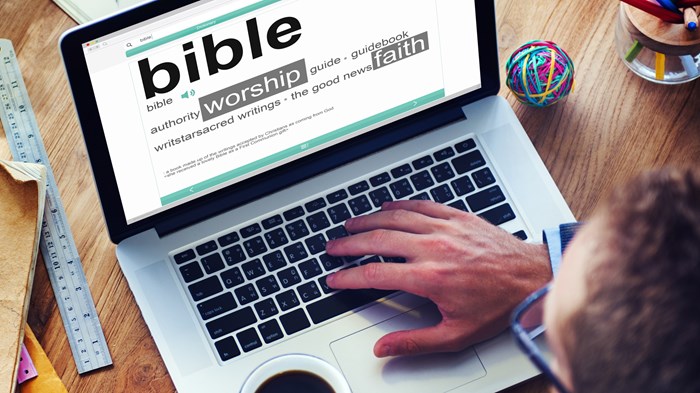 On Election Day, more people were searching the Bible for topics involving the end times than for praying for government.

And the top Bible verse of the 2016 presidential election: 2 Chronicles 7:14.

In the New International Version, the passage reads, “If my people, who are called by my name, will humble themselves and pray and seek my face and turn from their wicked ways, then I will hear from heaven, and I will forgive their sin and will heal their land.”

Top 20 keyword searches on Nov. 9 on Bible Gateway (bold terms are election-related; others on the list are perennially popular):

Many Christians use 2 Chronicles 7:14 as encouragement to pray for their country since it covers a lot of ground (humility, prayer, repentance, forgiveness, healing). Christian leaders like Anne Graham Lotz, Franklin Graham, and Joel Osteen shared the verse in their election remarks, and it was quoted in pastors’ op-eds and letters to the editor in newspapers across the country.

It was even read aloud in Congress on Tuesday, in honor of National Bible Week.

Vice President-elect Mike Pence also referenced 2 Chronicles 7:14 in a CBN interview in October, saying, “It's an important time for us to pray, and I believe what has always been true and is still true today: that if his people who are called by his name will humble themselves and pray, that he'll again hear from heaven and he'll heal our land.”

Florida Southern Baptist pastor Dean Inserra nodded to the verse a month before the election, tweeting, “Somebody take 2 Chronicles 7:14 out of context real quick. We need a God Bless America rally pronto.”

Meanwhile, OpenBible.info founder Stephen Smith charted the differences between topical Bible searches around Election Day 2016 when compared to Election Day 2012. Among more than 300,000 queries, notable increases include topics like the plans God has for us (up from No. 106 to No. 14), false prophets (up from No. 167 to No. 13), trust no man (up from No. 50 to No. 18). Notable decreases include judging others (down from No. 5 to No. 32) and being thankful (down from No. 8 to No. 83). Other topics like protecting Israel and bad leadership stayed stable.

“On the day after the US presidential elections, many Americans are looking to the Bible for wisdom on reconciling the results with their personal beliefs and feelings—whether joy, sorrow, or something else entirely,” said Smith, a Bible data guru.

2 Chronicles 7:14 can apply both to Christians seeking God because they were unsettled by the election results, and to those who view the outcome as an answer to their prayers. Charisma magazine reported that “groups around the country were … praying and fasting, not just for Trump's victory, but—in the spirit of 2 Chronicles 7:14—for the Lord to hear our prayers and heal our broken land.” Trump supporters Michele Bachmann and David Barton cited their call to prayer as the impetus for his late-night lead.

Here is Smith’s chart comparing the top 25 topical searches tied to the past two presidential elections: 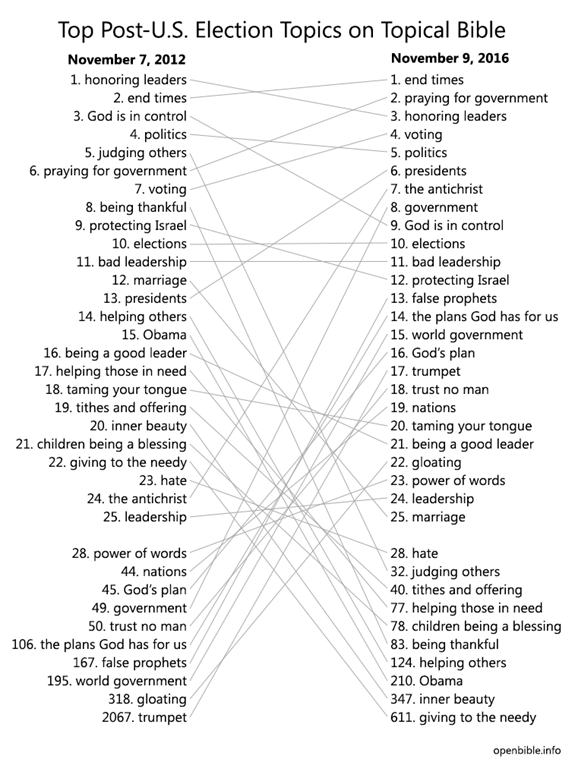 The “power of words” jumped up a few places on the chart and peaked as the fourth most-popular topic (behind voting, marriage, and forgiveness) following the release of the Access Hollywood clip portraying Trump’s crude remarks on women last month. On October 8, the day after that news broke, the No. 2 search on Bible Gateway—second to their typical top search term, love—was “out of the overflow heart, the mouth speaks.”

This teaching comes up several times in the Old and New Testaments, including Matthew 12:34 (“You brood of vipers, how can you who are evil say anything good? For the mouth speaks what the heart is full of”) and Matthew 15:8 (“But the things that come out of the mouth come from the heart, and these things defile a man”).

The biblical directive to “be subject for the Lord's sake to every human institution” (1 Pet. 2:13) didn’t peak in Bible searches, though it commonly comes up as encouragement to vote. The week before the election, John Piper challenged the notion that voting was a binding duty for Christians based on this verse. He also told followers that he would not be voting for either major candidate.

Trump and Pence did not quote Scripture in their victory speeches on election night—Trump himself didn’t even mention God—but their opponents brought up passages in their concessions the following day.

Hillary Clinton referenced Galatians 6:9, saying “Scripture tells us let us not go weary in doing good, for in good season we shall reap. My friends, let us have faith in each other, let us not grow weary and lose heart, for there are more seasons to come and there is more work to do.” Her running mate Tim Kaine summarized the parable of the vineyard from Matthew 20.