Christian relief workers wait for floods to recede before they can make it to the hardest-hit places like Man-O-War Cay.
Megan Fowler|September 5, 2019 08:00 AM 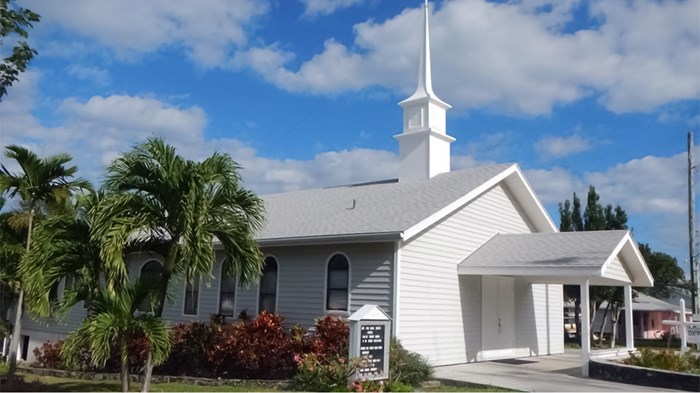 Since September 1, Pastor Randy Crowe has had limited contact with his former congregation on Man-O-War Cay, Bahamas. With no electricity, phones, or cellular service on the island, Crowe cannot reach anyone.

But during his one satellite call with a former congregant at New Life Bible Church, Crowe learned that the church he pastored for 12 years is gone, destroyed in the 200 miles-per-hour sustained winds surrounding the eye of the Category 5 storm.

The island, which has fewer than 300 residents, also endured tornadoes embedded in Dorian’s eye wall as the storm lumbered across the 700 islands that make up the Bahamas.

CNN reported that Man-O-War Cay, part of the hardest-hit area of the Abaco Islands, suffered widespread damage to 90–100 percent of its buildings. There were three churches on the tiny island: New Life Bible Church, Church of God, and the Gospel Chapel.

New Life, covered in grey siding and flanked by palm trees, had been boarded up with plywood on each window along the sanctuary, in preparation for the storm, but it was not enough to hold back Dorian’s force.

“New Life and the cottage are all shuttered up,” read a final post on the church’s Facebook page before the storm. “The rest is in God’s hands.”

Having assisted with hurricane relief for every hurricane to hit the Bahamas since 1992, Crowe called Dorian the “worst one ever.”

With such severe infrastructure damage, Bahamian church leaders have not been able to contact fellow pastors in the US. The Cooperative Baptist Fellowship reports that it has not heard from the pastors of its nine churches in the Bahamas.

It took three days for any outsider to reach Man-O-War. Since the closest airport in Marsh Harbour is under two feet of water, Crowe must wait until the weekend to bring supplies in his Piper Cherokee 6 plane.

But once the airport reopens on nearby Abaco Island, Crowe plans to bring in emergency supplies like tarps, chainsaws, hygiene products, generators, powdered drinks, and ready-to-eat meals.

Soon he will organize teams to fly down and help clean up and rebuild with Island Outreach, the ministry he and his wife Paula founded four decades ago.

“Our efforts will focus on Marsh Harbor and Man-O-War Cay,” Crowe said. “There will be many trips. The first priority is to secure the houses and roofs and clear roadways while making sure everyone has food and water.”

Man-O-War Cay owes part of its quaint, remote feel to its Christian heritage. Because of the longtime presence of Brethren and Pentecostal churches on the island, it never legalized drinking, and without bars or hotels, never grew into a major tourist spot. (Many of the island’s residents are direct descendents of the earliest settlers, British Loyalists who moved to the Bahamas after the Revolutionary War.)

On the larger Grand Bahama island, reports already indicate that churches have opened as shelter, with Jubilee Cathedral housing 150 people.

Samaritan’s Purse landed in Nassau with relief supplies on Thursday, bringing shelter materials, water filters, and filtration units. Its disaster response team has a smaller plane and helicopter they hope to use to access harder-to-reach islands to continue to assess needs and distribute relief materials.

“We all work together because that’s what makes the body of Christ so good,” Crowe said. “We’re better together.”