The Alpha and the Omicron: COVID-19 Disrupts Christmas Worship Again

From London to DC, a new variant has shifted plans for big holiday services and celebrations in 2021.
Miguel Petrosky|December 21, 2021 11:38 AM 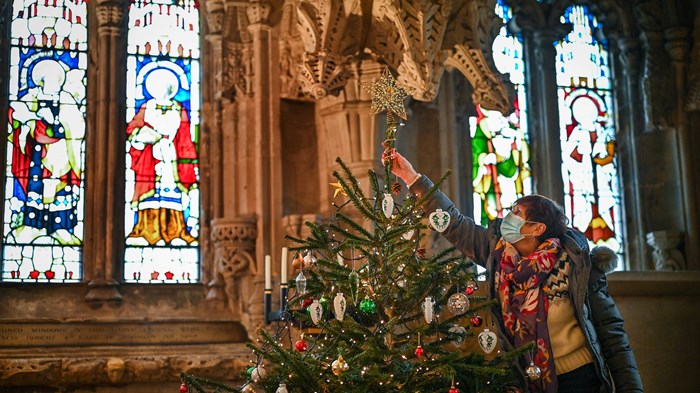 “Join us for Christmas Eve!” read the homepage for the District Church in Washington, DC, as the congregation planned to gather for the holiday for the first time since 2019.

The District Church, a multiethnic, nondenominational church in the Columbia Heights neighborhood, had scheduled three in-person services for Friday. But last Sunday, lead pastor Aaron Graham announced that due to the spread of the omicron variant of COVID-19, Christmas Eve would be filmed and shared online instead.

“We had not planned this, but we just didn’t really know who was going to be in town [Christmas] week, and we just had a lot of people gone,” said Graham. The District Church had already made plans to briefly go virtual online for the two Sundays following Christmas to give their 20-member staff time to unwind for the Christmas and New Year season.

“With cases increasing in DC—the last two days have been higher, we just said, ‘You know what? Let's just pivot online. We can go online and not lose momentum in the church overall.’ The pandemic taught us that.”

Fellow church leaders, especially in major cities where coronavirus cases are taking off, have made similar announcements, while others are weighing the risks as public health officials project record-high cases levels coinciding with holiday travel and gatherings.

This isn’t the scenario pastors expected. Months ago, nearly all US churches had finally returned to in-person worship, and countries had lifted church lockdowns. Even as Advent began just four weeks back, the rapid availability of COVID-19 vaccinations and booster shots made it seem like this Christmas would be different than last year and churches would be able to celebrate together in person. But then came omicron.

The variant took off earlier in the United Kingdom, with record case loads reported last week. Days ago, Christmas gatherings at two of London’s biggest evangelical churches were rescheduled. Holy Trinity Brompton Church (HTB) and Hillsong Church London postponed their popular carol services. HTB will not be holding in-person or online services for the rest of the year.

“The steps we are taking are to help keep our staff, volunteers, you and your families safe,” read the statement. “We want to ensure the health and safety of everyone involved is our main priority so people can enjoy Christmas together with friends and family.”

In most churches, Christmas is one of the best-attended celebrations of the year. Plus, annual festivities like carol services, dinners, pageants, and other celebrations draw big crowds.

The cancellations prompted by omicron take on a weightier significance than missing one special service. They’re an indicator that—despite the hopes and prayers and precautions of the past year—the pandemic continues to take its toll.

“As a pastor, I’m actually becoming more concerned with the spiritual/mental health and social isolation risk that I’m seeing,” said Graham at the District Church.

“There are a lot of other pandemics that are also happening right now. While we, as DC-educated people, value our physical health, we can sometimes be less aware of what this prolonged pandemic is doing to our spiritual life, our intimacy with God, our relationships with other people in community, and our mental health.”

His church, which averaged 800 in weekly attendance prior to the pandemic, has seen in-person attendance cut in half since reopening last July, while the rest of the congregation still attends virtually. The church still plans to return to an in-person format in January.

In New York, where record-high infections have led some to call off Broadway shows and temporarily close restaurants, churches have to weigh whether in-person services can continue safely as omicron takes over as the dominant variant.

The New York Times reported that St. John the Divine, the Episcopal Cathedral in Manhattan, was “the first major house of worship in New York to cancel in-person services before Christmas,” calling off holiday services, regular weekend services, and special concerts until further notice.

Most churches in Manhattan had already planned to celebrate Christmas at December 19 services, since a significant portion of their flocks would be leaving New York for the holiday itself, according to Drew Hyun, pastor of Hope Church Midtown. Because of the concern surrounding the omicron cases, many congregations went virtual that week.

Leaders at Hope Midtown—which saw its attendance drop by half, down to around 150, during the pandemic—decided on Saturday night to go online for December 19. The church still plans to hold an in-person and digital Christmas Eve service in conjunction with another partnering church, contingent on new information and data coming in.

For Hyun and Hope Midtown, the pandemic has made them more agile in preparing for the unexpected.

“We’re more obviously ready for some of these transitions than ever,” Hyun said. “We know that, just as we got through it last year, that will get through it this year. In many ways, that’s what the Christmas story is about, like God working in against-all-odds kinds of circumstances.”

Even with rates rising, many churches are keeping in-person services but reiterating the need to take precautions and reminding people to stay home if they’re sick or have been in contact with a sick person.

As for Graham, despite the challenges caused by the omicron variant, he remains hopeful for the upcoming new year in 2022.

“I believe that there are times that we go through, like moments found throughout Scripture, for instance, that refine us and prepare us for a move of God,” said Graham. “And I really believe that we're on the cusp of a spiritual awakening—that the church is, in some ways, getting smaller so that we can figure out who’s radically committed to being a disciple of Jesus. And I think what comes out of that is going to be absolutely beautiful.”

The Alpha and the Omicron: COVID-19 Disrupts Christmas Worship Again

The Alpha and the Omicron: COVID-19 Disrupts ...