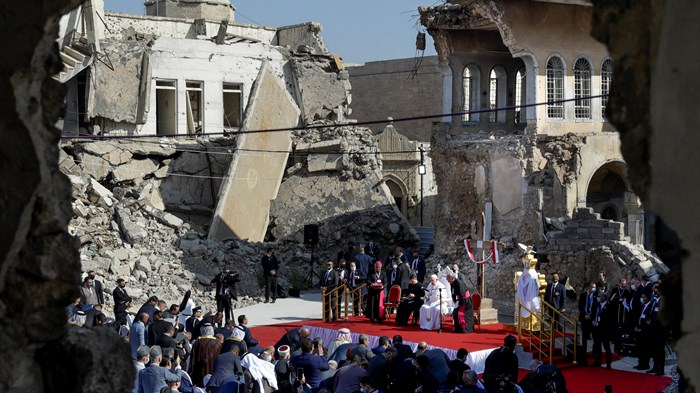 Image: Andrew Medichini / AP
Pope Francis, surrounded by shells of destroyed churches, leads a prayer for the victims of war at Hosh al-Bieaa Church Square in Mosul, Iraq, once the de-facto capital of ISIS, on March 7, 2021.

QARAQOSH, Iraq — Pope Francis urged Iraq’s Christians this past Sunday to forgive the injustices against them by Muslim extremists and to rebuild as he visited the wrecked shells of churches and met ecstatic crowds in the community’s historic heartland, which was nearly erased by the Islamic State group’s horrific reign.

“Fraternity is more durable than fratricide, hope is more powerful than hatred, peace more powerful than war,” the pontiff said during prayers for the dead in the city of Mosul, with the call for tolerance that has been the central message of his four-day visit to Iraq.

At each stop in northern Iraq, the remnants of its Christian population turned out, jubilant, ululating, and decked out in colorful dress. Heavy security prevented Francis from plunging into the crowd as he would normally. Nonetheless, they simply seemed overjoyed that he had come and that they had not been forgotten.

It was a sign of the desperation for support among an ancient community uncertain whether it can hold on. The traditionally Christian towns dotting the Nineveh Plains of the north emptied out in 2014 as Christians—as well as many Muslims—fled the Islamic State group’s onslaught. Only a few have returned to their homes since the defeat of ISIS in Iraq was declared four years ago, and the rest remain scattered elsewhere in Iraq or abroad.

“It is almost as if we have more churches than people,” Ashur Eskrya, president of Assyrian Aid Society–Iraq, told CT.

“This is our chance to show what is happening, and to stop the bleeding.”

Bells rang out for the pope’s arrival in the town of Qaraqosh.

“The road to a full recovery may still be long, but I ask you, please, not to grow discouraged,” Francis told a packed Church of the Immaculate Conception. “What is needed is the ability to forgive, but also the courage not to give up.”

The Qaraqosh church has been extensively renovated after being vandalized by ISIS militants during their takeover of the town, making it a symbol of recovery efforts.

Iraq’s Christian population, which has existed here since the time of Christ, has dwindled from around 1.5 million before the 2003 US-led invasion that plunged the country into chaos to just a few hundred thousand today.

Francis’s visit this past weekend aimed to encourage them to stay, rebuild, and restore what he called Iraq’s “intricately designed carpet” of faiths and ethnic groups.

Dressed in white, Francis took to a red carpeted stage in Mosul on his first stop of the day, surrounded by the grey hollowed-out shells of four churches—Syriac Catholic, Armenian Orthodox, Syriac Orthodox and Chaldean—nearly destroyed in the war to oust ISIS fighters from the city.

It was a scene that would have been unimaginable years earlier. Mosul, Iraq’s second largest city, was at the heart of the ISIS so-called “caliphate” and witnessed the worst of the group’s rule inflicted on Muslims, Christians, and others, including beheadings and mass killings.

He deviated from his prepared speech to emphasize the plight of Iraq’s Yazidi minority, which was subjected to mass killings, abductions, and sexual slavery at the hands of ISIS.

“How cruel it is that this country, the cradle of civilization, should have been afflicted by so barbarous a blow,” Francis said, “with ancient places of worship destroyed and many thousands of people—Muslims, Christians, Yazidis—who were cruelly annihilated by terrorism and others forcibly displaced or killed.”

In advance of his visit, the Iraqi parliament approved the long-awaited Yazidi Women Survivors Law, establishing a mechanism for justice and rehabilitation.

But 46 Iraqi and international civil society organizations—including Christian Solidarity Worldwide, Middle East Concern, and the Religious Freedom Institute—called for reparations and support for all survivors.

ISIS inflicted atrocities against all communities, including Muslims, during its three-year rule across much of northern and western Iraq. But the Christian minority was hit especially hard. The militants forced them to choose among conversion, death, or the payment of a special tax for non-Muslims. Thousands fled, leaving homes and churches that were destroyed or commandeered by the extremists.

Mosul, Iraq’s second largest city, became ISIS’s bureaucratic and financial backbone. It took a ferocious nine-month battle to finally free the city in July 2017. Between 9,000 and 11,000 civilians were killed, according to an AP investigation at the time, and the war left a swath of destruction. Many Iraqis have had to rebuild on their own amid a years-long financial crisis.

Priest Raed Kallo was among the few Christians who returned to Mosul after ISIS was defeated. “My Muslim brothers received me after the liberation of the city with great hospitality and love,” he said on stage before the pontiff.

Before ISIS, he had a parish of 500 Christian families. Now only 70 families remain, he said. “But today I live among 2 million Muslims who call me their Father Raed,” he said.

Gutayba Aagha, the Muslim head of the Independent Social and Cultural Council for the Families of Mosul, invited “all our Christian brothers to return to this, their city, their properties, and their businesses.”

Throughout his four-day visit, Francis has delivered a message of interreligious tolerance to Muslim leaders, including in a historic meeting Saturday with Iraq’s top Shiite cleric, Grand Ayatollah Ali al-Sistani.

But Christians say it will take real changes on the ground for them to be able to return and stay, saying they face discrimination and intimidation from Shiite militias on top of the economic hardships suffered by all Iraqis.

Long-term solutions are needed, Nadine Maenza of the US Commission on International Religious Freedom, told CT. So while Qaraqosh is the success story, only 5 miles south the traditionally Christian city of Bartallah is threatened with demographic change. It maintains the harshest militia presence, she said, some of which have been sanctioned by the US government.

“I want to be optimistic,” Maenza said. “But it is hard to imagine that only one visit will change anything.”

Qaraqosh resident Martin Auffee, however, said he was overjoyed by the pope’s visit and appreciated that he showed he was with Christians as he urged them to endure. But the 27-year-old said many of the young in his area have grown weary of lack of opportunity.

“We don’t know for how long they can cling onto hope and continue to stay in Iraq because there’s a lot of pain, unemployment, and uncertainty,” he said. “My whole life has been filled with pain, misery, war, persecution, and displacement. Things are difficult for those living here.”

At Qaraqosh, Francis urged its residents to continue to dream, and forgive.

“Forgiveness is necessary to remain in love, to remain Christian,” he said.

One resident, Doha Sabah Abdallah, told him how her son and two other young people were killed in a mortar strike August 6, 2014, as ISIS neared the town. “The martyrdom of these three angels” alerted the other residents to flee, she said. “The deaths of three saved the entire city.”

She said now it was for the survivors to “try to forgive the aggressor.”

Francis wrapped up the day—and his visit—with a Mass at the stadium in Irbil, in the semi-autonomous northern Kurdish region. An estimated 10,000 people erupted in ululating cheers when he arrived and did a lap around the track in his open-sided popemobile, the first and only time he has used it on this trip due to security concerns.

On the makeshift altar for the Mass was a statue of the Virgin Mary from the Mar Adday Church in the town of Keramlis, which was restored after ISIS militants chopped off its head and hands.

“Religion is love, grace, forgiveness,” said Louis Sako, patriarch of the Chaldean Catholic Church, in advance of the visit. “Religion is a message, and humanity is its core.

But perhaps some Iraq Christians have a vision for even more.

“This is a time of healing for our country,” Farouk Hammo, pastor of Baghdad Presbyterian Church, told CT.

“But we are still praying for a visitation by the Lord Jesus—a revival—and it will happen.”