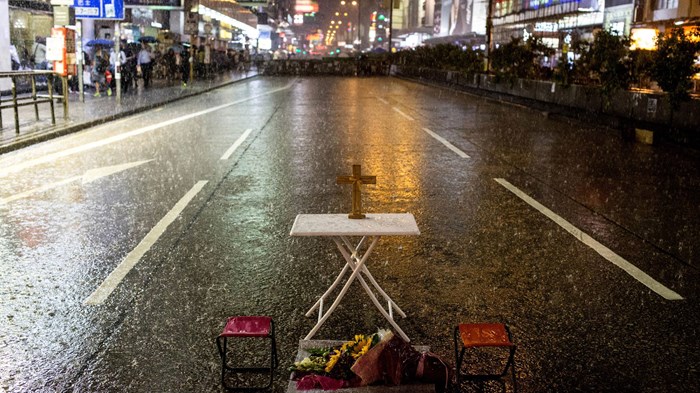 For many Hong Kongese, these are bittersweet memories. On the one hand, the series of pro-democratic movements since 2014 show the Hong Kongese’s urge for a better society that goes beyond the capitalistic ethos of the city; on the other, those movements became a Pandora’s box of civil unrest. Two years ago, 2 million people protested against the extradition law in June, and the implementation of the national security law the year after led to mass arrests and a crackdown on democratic parties.

Hong Kong Christians famously took to the streets in prayer and in song as part of the demonstrations. But what international audiences may have not seen is how the political developments in Hong Kong launched the church into the digital public sphere too. Facing tighter religious freedoms, Christian leaders have grown their presence online and on social media.

Even as the Hong Kong diaspora has scattered across the globe, leaders have taken to the digital space as a platform to show solidarity to the persecuted and to instruct followers to persevere through difficult times. The digital public theology they’ve developed over the past seven years has grown into a witness for the global church.

Writing on the Mid-Autumn Festival, the day Hong Kong families tend to reunite (tuan yuan) to see the full moon (yue yuan, a play on words for “reunion”), I think of the persistent prayers for our brothers and sisters are suffering on the other side of the world and our compassion for those who cannot see their families due to exile or imprisonment.

In the mid-2010s, protestors in Hong Kong relied on online platforms such as Facebook, Firechat, and Golden Forum to communicate their strategies, which required immediate response during the movement; half of those involved in demonstrations were under 25.

The move inspired a shift among pastors and Christian leaders as well, as they intentionally began to develop a digital public theology for the first time. They addressed what was happening around them from a Christian perspective.

Many reflected on the meaning of the separation of church and state, which is stressed in most evangelical denominations in Hong Kong. Because of the wide access online, their teachings extended to reach those who wouldn’t usually read Christian articles in traditional media.

Like the chasm during the 2016 US election, factions formed online during and after the movement, with Christians on both sides. The pro-democratic activists became the “yellow team” because of their frequent use of a yellow umbrella as a symbol—umbrellas being a tool for self-defense when protestors were attacked by tear gas. The “blue team” was composed of those who supported police, who wore blue uniforms and tried to suppress “violence” through tear gas.

Both sides frequently received memes and news in their WhatsApp chat groups, but the yellow team tended to be digital natives who generated content on the pro-Umbrella Movement Facebook groups.

The Umbrella Movement had an immediate effect in churches. Many protestors struggled to stay at congregations that maintained silence in an effort to uphold the separation of church and state. This inspired the establishment of parachurches, such as Umbrella City Cyberchurch (UCC), which launched in 2014, and Flow Church, which began in 2018.

The advantage of establishing these parachurches is that they provide flexibility for pastoral leaders to work alongside other local churches without being bound by existing denominations with fixed political ideologies.

“The Umbrella City Cyberchurch intends to construct, reflect, and practise a ‘Umbrella Theology,’” UCC writes on its Facebook page. “The UCC aims to improve and deepen the Umbrella Revolution as a valued revolution, to reconstruct Hong Kong’s core values.”

These parachurches tend to be more tech savvy and are active on social media, providing live-streamed services for young Christians who question the role of churches in the movement.

The Umbrella Movement also raised the issue of decentralization, criticizing authority figures who dominated the direction of the movement. While this is true for political ideologies, it is arguable whether Christian communities embrace the concept of decentralization wholeheartedly.

Digital theologian Heidi Campbell has highlighted the importance of charisma among pastoral figures online; those who emerged as key opinion leaders after the movement were usually pastors or theologians that already held some sort of authority among their communities.

I do not perceive digital media and especially dynamics among Christian groups as a total decentralization, but the shift of public theology online was observable. For example, the lead pastor of Flow Church, John Chan, continues to use his personal Facebook page, theologia autumnitas rosea est (theology is pink autumn), as well as Flow Church’s Facebook page to narrate his struggle to be a pastoral leader after the Umbrella Movement.

His reflections online resonated with church leavers who could not express their political views freely in physical churches, where politics became a taboo subject. In some ways, the shift helped create a platform for protestors to reflect on a theology that engages with public issues after the movement.

June 2019 became the kairos for Christian leaders to speak out, due to the proposal of extradition laws in Hong Kong that would have imposed China’s laws on the city and affected religious freedoms. Outdoor prayer meetings were promoted on social media, which attracted both Christians and non-Christians.

Since religious assembly was exempted as legal gatherings under Hong Kong laws, protestors joined Christians to perform “Sing Hallelujah to the Lord” near the Hong Kong government complex as an act of resistance. The public presence of Christians was amplified at the protest site, as well as through livestreams on Facebook.

Moreover, digital media has become a platform for Christian groups to express their public theology, not only because of the frequent usage of social media during the social movements but also because of the restrictions on in-person activities due to COVID-19 since January 2020.

For example, the Hong Kong Pastors Network, comprising pastoral leaders of different denominations, issued the statement “Hong Kong 2020 Gospel Declaration” online to challenge authoritarianism in May 2020, which highlighted the importance of justice as well as the proclamation of gospel. The statement can be compared to the 1934 Barmen Declaration from German pastors against Nazis ideology.

“In the face of a totalitarian regime that distorts facts, controls the media, and buries the Truth, the Church courageously rejects all falsehood, and points out what the regime has done wrong,” read one point.

While the Umbrella Movement had already caught media attention globally, the campaigns in the following years focused much more on international attention, with several crowdfunding advertisements placed in major newspapers. Originally these were created by protestors who wished to raise concerns to those who support democracy all around the world.

However, because of the emphasis on international attention, the social movements about Hong Kong have become more transnational, such as the continuous campaign of democracy in Hong Kong by Nathan Law, the youngest elected lawmaker in Hong Kong history and an asylum seeker in the United Kingdom.

Several Protestant leaders, after moving overseas, continue to build on the existing theological dialogue to nurture Christians online. For these leaders, such as Rev. Roy Chan of England Good Neighbour Church and Rev. Yeung Kin-keung (d. September 15, 2021) of Hong Kong Christian Church in Edinburgh, it is more about “telling the truth of the gospel” than about highlighting the superiority of their identity as yellow team Christians.

Rather than saying that the protests are over, I think of the way they have scattered Hong Kongese all around the world. In my current city, Edinburgh, I see that half of the protestors who join the in-person rallies about the situation in Hong Kong are Protestants or at least associated with the Chinese churches here.

While English media tends to report the development of pro-democratic activists, it should be stressed that the blue team is also quite active. Vancouver-based Christian philosopher Leung Yin-shing is a popular guest speaker among Chinese media in the diaspora such as the Media Evangelism, despite his comments that protestors were too violent when they fought back against the triads during the 721 mob attack in July 2019.

On YouTube, at least half of the results covering the protests in Chinese condemn the participants as rioters or cockroaches. Whether or not one perceives those videos against the protests as propaganda, the digital sphere is not as pro-democratic as one may think.

As Christians, we are blessed with free will granted by God, as well as the freedom of speech online. We may also discern how we can use them sensibly to be the witness of God. While I am not a huge fan of the phrase “silence is golden,” which has damaged Hong Kong churches since the Umbrella Movement, we may ponder whether our online speech is useful for building others up (Eph. 4:29).

We may also wonder whether sharing particular news stories online is beneficial for our followers, especially since some of those can be fake news or with false condemnation. This will be a continuous lesson for Hong Kong Christians, as well as my friends in the UK or the US where the digital space is further dichotomized due to political differences.

Indeed, Hong Kong Christians will face further persecution, which is already built up by the attack of Ta Kung Po, the state-owned newspaper in Hong Kong. For many, life in the present is much worse than 1984 Hong Kong, the year Margaret Thatcher and Deng Xiaoping signed the Sino-British Declaration to confirm Hong Kong’s return to China in 1997—for the latter faced only imaginary fear, but the former’s fear is immediate.

Following the cross removal of Zhejiang churches in the mid-2010s, Hong Kong Christians often wonder when they will be the next, especially as Xia Baolong, a figure who is instrumental in the removal campaign in Zhejiang, has been Director of the Hong Kong and Macau Affairs Office since February 2020.

The pursuit of peace in Christians’ hearts, as well as the work produced by this mentality, will differentiate their witness from people with other beliefs. In the Hong Kong protests, the phrase “fear, then you will lose your whole life” (qie, ni jiu shu cheng shi), from a 2013 movie Unbeatable, is often quoted to express the urgency of protesting for Hong Kong’s future.

I find this phrase to be rather Christian: If fear dominates your life, it seems to contradict the belief that God provides guidance and peace. Living up to this motto will not be easy, but it will become essential as events develop in Hong Kong.

When traditional media in Hong Kong fails to provide comprehensive views on certain news, the shift to digital media will become more evident in the coming months and will be accelerated due to the mass migration of Hong Kongese to other parts of the world.

Online engagement by Christians will become more significant to further develop a digital public theology for Hong Kong, whether it is for evangelism or for providing a space for those who are traumatized by the social events in Hong Kong.

To be the channel of peace, while continuously speaking the truth, will be the foremost responsibility for all Christians in the digital space. I welcome brothers and sisters all over the world to pray for Hong Kong Christians for their witness online and offline.

Calida Chu is a Hong Kongese theologian and Teaching Fellow at the School of Divinity, University of Edinburgh. She can be found on Twitter at @calidachu.