Evangelical Ukrainian churches in the home of the largest Ukrainian population in the United States wept and prayed Sunday. Having escaped persecution in the Soviet Union themselves, they already have testimonies of God’s faithfulness.
Emily Belz in New York|February 28, 2022 12:00 PM
español 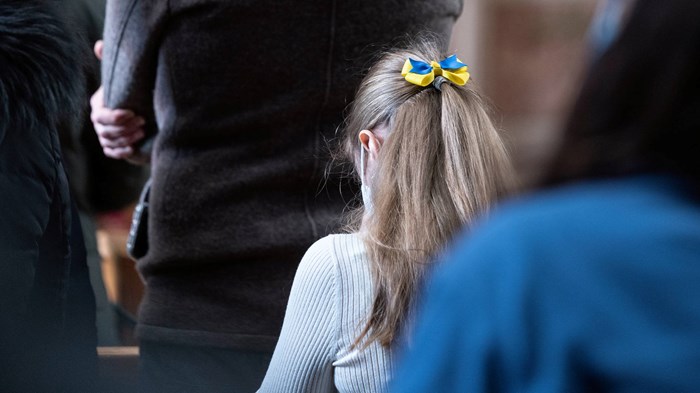 On Sunday, Ukrainian evangelicals in New York City gathered in their churches and wept, vented, and sang, feeling the existential threat to their loved ones and their homeland alongside people around the world.

As President Vladimir Putin put his nuclear forces on high alert, the Ukrainian Americans called their praise songs “weapons of war.” Outside the churches on a blue-skied morning, fellow New Yorkers continued protests against the Russian invasion, with some worshipers joining after their services.

New York City has the largest Ukrainian population in the United States, a community of about 150,000, historically concentrated in the East Village of Manhattan and Brighton Beach in Brooklyn. Thousands had come to the United States as religious refugees, most of them Baptist or Pentecostal, under a special asylum for those fleeing Soviet religious persecution.

In the East Village, some of those refugees attend Cornerstone First Ukrainian Assembly of God, where elderly women in traditional headscarves worship alongside young people in sweatshirts. The Pentecostal congregation now includes Russians, Nigerians, and Belarusians, with services in a mix of Ukrainian, Russian, and English.

Many at Cornerstone have family in Ukraine and fear their fate as the war continues day by day. On Sunday, one woman with white hair wept softly through the whole service.

“What can we do but stay in prayer and cry to God?” said elder Peter Pristash, who lived much of his life in Ukraine and is now a US citizen.

As the nuclear threat escalated tensions, people in the service were in disbelief about how quickly the situation had spiraled.

“Our minds fail to understand: How is this possible in this day and age?” said Pristash before the congregation. “God allowed this to happen, and we do not know why. But we know God is sovereign, and he is on his throne. There are people who think if they kill someone it will accomplish a goal.”

Cornerstone’s worship team that day included a Ukrainian jazz saxophonist, Andrey Chmut, who was touring in the United States and recording an album with American jazz pianist Bob James when the war broke out.

Now he can’t get back to Ukraine, and his wife and young daughter are stuck there. His flight was supposed to leave Monday, but with all commercial flights to Ukraine grounded due to the war, he came to the Sunday service with his saxophone.

“Our hope is in the Lord, the one who holds things together,” Chmut said to the church after sharing his situation and thanking them for prayer. “No matter how things fall apart, the Lord created this world, and he holds things in his hands.” People murmured amens and let out sniffles.

Two of Chmut’s musician friends in Russia who spoke publicly against the invasion are now in prison, he said after the service. Ukrainian culture and the arts were “flourishing” the last few years, but “now it’s in jeopardy. … I don’t want to live under Putin’s regime.”

He played through tears. He was trying to figure out if he could get to Poland, despite not having a visa, and somehow meet his wife and daughter there. All he could think about was a nuclear attack. His wife and daughter “don’t know even how tonight is going to be,” he said.

Even if a nuclear attack happens, Chmut told the church in Ukrainian, “the hope we have is we go home. And we will be together with Jesus, the one we know will help us.” One of the members translated his words to the congregation in English.

During the service, people quietly scrolled through news articles on their phones. Paul Oliferchik, one of Cornerstone’s pastors, acknowledged that many in the congregation might wish they could be in Ukraine since they don’t know how to help from the US.

“Be the nonanxious presence of Christ that transcends human conflict,” he urged them. “Maybe all you have to offer to God is prayer in tears … It is important to create time to lament before God.”

Pristash, the elder, said he was too old to serve in the army, but he had imagined what he would do if he could. “Today our weapons are here,” he prayed. “We can call upon God and pray to him.” He quoted Ephesians 6:12 that “our struggle is not against flesh and blood.”

With a church of people with different backgrounds, Oliferchik said after the service that the pastors have been praying against conflict in the church on this topic. He said they have been unified so far that “none of us wants this.”

Oliferchik was born in Moscow and his parents are from Belarus, though he grew up in the United States. His grandfather was imprisoned for his Pentecostal faith in the Soviet Union. He said his parents were regularly mocked for their faith. Throughout the service, Oliferchik hopped up to translate in Ukrainian or Russian. He and his wife both have relatives in Ukraine.

“This is pure evil from Putin’s regime,” he said. Thinking about his grandfather and the persecution of evangelicals in Russia, he said, “We don’t want history to repeat.”

Communities of Slavic evangelicals grew in the 1990s around US churches, with the largest population of evangelical refugees settling in Sacramento, California, according to historian Catherine Wanner in Communities of the Converted: Ukrainians and Global Evangelism. The 1989 Lautenberg Amendment, which gave special asylum to those fleeing Soviet religious persecution, continues to this day.

Cornerstone has served an “oasis” for immigrants, said Pristash, and he hopes it will be a landing place for anyone who is fleeing Ukraine and comes to the United States.

His church was not alone in its laments on Sunday. A Korean congregation with ties to the church showed up in solidarity and filled the back quarter of the pews. As the church sang “How Great Is Our God” in Ukrainian, the Korean church members sang along in English with hands lifted.

The pastor thanked them for coming, and said afterward how glad the Cornerstone congregation was to have other Christians to “sit with those who were suffering.”