As the national pro-life movement celebrated, activists opposing abortion in blue states watched years of setbacks happen in a few days. Still, they are finding different ways of winning.
Emily Belz in New York|July 1, 2022 10:00 AM 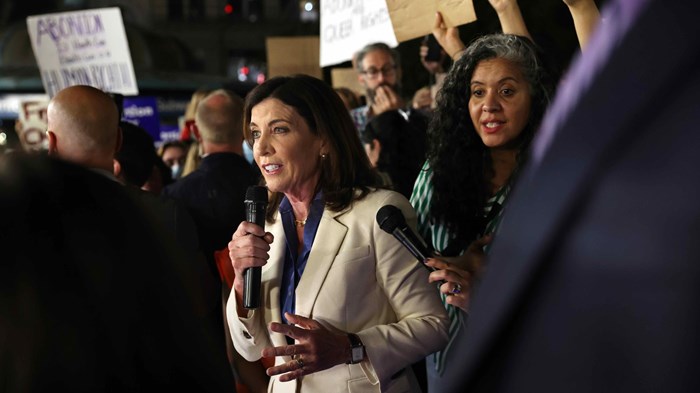 As pro-life groups nationally celebrated the overturning of Roe v. Wade, and as pro-lifers in red states debated how far to go with abortion restrictions, pro-lifers in blue states are watching setbacks they think will take years to undo.

Blue states are also considering constitutional amendments on abortion rights, which pro-lifers worry would hurt their cause for decades. At this moment, no US state has named abortion protections in its state constitution. The states debating such amendments already have abortion codified in their laws, but adding it to the constitution would keep abortion protected even if political power in the state changed and the legislature reversed its abortion laws.

“In New York and California and other states, it’s like working under Newton’s third law of motion,” said evangelical Jason McGuire, who leads New Yorkers for Constitutional Freedoms. McGuire has worked for 16 years in the state legislature on stemming abortion laws, often the lone lobbyist on the issue alongside the New York Catholic Conference. “Every time something good happens at the national level, we know there’s going to be some pushback at the state level.”

The legislature in Vermont, where abortion is legal up until birth for any reason, passed a constitutional amendment earlier this year stating that “an individual’s right to personal reproductive autonomy is central to the liberty and dignity to determine one’s own life course.” That amendment now goes to voters in November.

Mary Beerworth has worked with Vermont Right to Life since the mid-1980s and became the executive director in 1996. She jokes that she has been working on pro-life issues in Vermont for “I think 112 years.” She said when legislators would see her and her one coworker approaching about the constitutional amendment on abortion, “They put in their earplugs.”

In all her years working on the issue, she has never seen pro-life legislation pass. The state had legal abortion through court order a year before Roe, and in the decades since then, “abortion rights were never endangered.”

After Dobbs, Beerworth’s organization was happy for the decision but didn’t stop to celebrate. She and her colleague watched the other side hold rallies. The ruling “has done a tremendous amount of damage,” Beerworth said, in how it affected Vermont.

The Supreme Court decision gave Vermonters impetus to vote for the constitutional amendment, which she sees as vague enough about “reproductive autonomy” to create all sorts of problems beyond abortion (for example, she notes that the amendment does not specify adults and could include minors).

But Beerworth talked herself into peppiness again, saying that with the general election battle over the abortion amendment, her group can educate more voters to know that Vermont legalizes abortion in all circumstances: “They’ve given us an opportunity here.”

In California, Molly Sheahan, the California Catholic Conference’s lobbyist on abortion issues, also felt the strange juxtaposition when the Dobbs decision came down at 7 a.m. her time on June 24. She felt “gratitude to God”—after 49 years of work from the pro-life side—but then said to herself, “All right, what’s next?” She knew she had business in the legislature to attend to.

The Monday after the Dobbs decision, California passed a constitutional amendment establishing an individual’s “fundamental right to choose to have an abortion” that will also go to voters for approval in November. The Catholic conference said the language was so vague that it would legalize abortion up until birth.

The California Family Council, a Christian organization led by evangelical Jonathan Keller, has joined the campaign to oppose the amendment, also focusing on the fact that the language would allow abortion until birth. Keller was feeling optimistic about the issue being by itself on a ballot, without a candidate attached to it: That might allow it to cut through normal partisan, socioeconomic, and denominational divides on abortion. Pro-life groups need to run a good education campaign, he said.

“This basically makes it impossible to regulate or protect women and children in any capacity,” he said. In California, “functionally, abortion is legal essentially for almost any reason whatsoever. But … this would make this explicit. It’s bad when the killing is done through loopholes, it’s worse when it’s affirmatively declared within the constitution itself.”

The constitutional amendment had so many sponsors when it was introduced that Sheahan knew the legislature already had the votes for it to pass. She turned her lobbying attention to what she said was a record number of abortion bills in a California legislative session: 19.

Thirteen of the bills came from the California Future of Abortion Council, a coalition of pro-choice groups, and included measures like funding to expand the workforce providing abortions and setting up additional abortion funds and grants. The Catholic bishops of California stated that “by providing extensive funding for abortion services without any corresponding equitable funding for pregnant women and mothers, the state exercises a destructive, coercive power in favor of ending innocent lives.” Sheahan was testifying against the bills the same week Dobbs came down.

Earlier in June, New York passed a large package of abortion legislation, including the authorization of a state commission to investigate the negative impact of crisis pregnancy centers. New York City’s Department of Health describes crisis pregnancy centers as “fake clinics … that try to stop people from getting abortions.” The centers have been subjects of firebombing and vandalism since Dobbs.

Pregnancy centers, pro-life and usually Christian affiliated, serve women in need at no cost. They provide counseling (including post-abortive counseling), donations, housing support, and often a range of health services like STD testing and ultrasounds. In New York, they are required to post signage about whether they have licensed medical staff.

One week after Dobbs, the New York legislature called a special session . One topic on the table was a constitutional amendment that included abortion rights. Unlike California and other states considering abortion amendments, New York faced significant opposition to the amendment from Christian groups and an Orthodox Jewish group, Agudath Israel. The religious groups argued the amendment—a general “equality” amendment that lists protections for choosing abortion alongside other protected classes—did not list religion as a protected class alongside the other rights.

The final version of the amendment included religion as a protected class alongside “pregnancy, pregnancy outcomes, and reproductive health care and autonomy,” a grab bag of words to try to cover abortion, contraception, and beyond. Catholics and evangelicals continued to oppose the amendment.

New York legalized abortion before Roe v. Wade, and in recent years it has made state abortion laws more expansive, removing certain licensing requirements for those performing abortions and making abortions legal up until birth for the life or health of the mother.

McGuire worked for years with his Catholic counterpart to combat those expansions, codified in the Reproductive Health Act. A coalition of Republican and Democratic legislators (including one key Jewish senator) blocked the act until it finally passed in 2019 when Democrats took a bigger majority.

Pro-life activists in blue states take the victories they can find.

“People will think it’s just a constant uphill battle; it’s challenging and defeatist,” said California’s Sheahan, who grew up in Sacramento. She doesn’t feel that way. “It’s my home, it’s worth fighting for. There’s always hope.”

Even California’s abortion amendment she saw as an opportunity to provide legislative testimony and talk to voters ahead of the November ballot.

Building a social safety net is one way of winning in a blue state. Sheahan has been working on other measures in the legislature on increasing hotel vouchers for homeless pregnant mothers, upping visiting hours for incarcerated moms with their kids, and expanding paid family leave for low-wage workers.

Legislators take her seriously on safety net legislation because they also know that the church is a large provider of social services on its own. The California Catholic conference put together a website in response to the expected reversal of Roe with resources for Catholics looking to help mothers, donate items to youth in foster programs, and support pregnancy centers or the church’s rental assistance programs.

The New York Catholic Conference’s Kristen Curran, who has been lobbying against abortion measures in the legislature, said red states could learn from blue states on building a safety net for families.

“Make it safer and more doable to bring children into this world and raise them,” Curran said.

The evangelical McGuire supports measures like tax credits for families and other measures to keep families intact. He noted that New York Governor Kathy Hochul put millions into funding out-of-state abortions but not “helping mothers in this state who are choosing life.”

“We see it as a long game,” said Curran. “Even though we know it’s a loser on the legislative stuff, we still come out and issue statements, I go on the news. We want to serve as a source of reminder to people what is at stake here.”

“I keep my energy up because really the goal is dropping the number of abortions. And that’s what we’ve been doing all these years,” she said. “If the law says abortion is legal and there are zero of them, we win.”