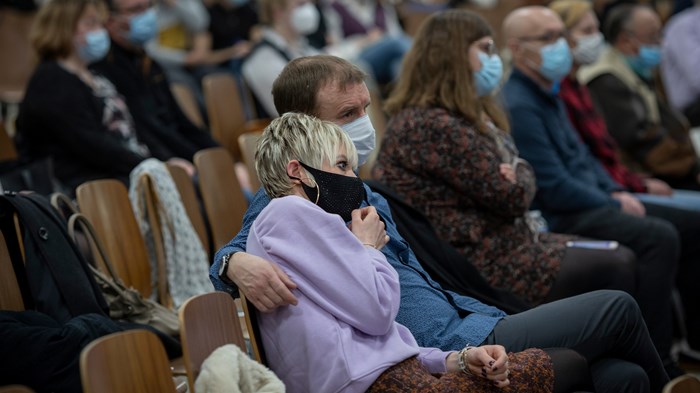 Florent Varak had been a pastor for nine years in 2001 when a 15-year-old church attendee disclosed that his father had been sexually abusing him.

“I was just stunned,” said Varak, who at the time pastored Evangelical Protestant Church of Villeurbanne-Cusset in Lyon.

Since the attendee was a minor, Varak believed this revelation required immediate legal action. He called the father into his office and explained that the man would either write a letter to the procureur de la République (district attorney) denouncing himself, or Varak would.

Varak wrote the letter, and the trial took place almost two years after a government investigation revealed that the abuser’s actions were not limited to his son. Varak attended the three-day trial and testified as a key witness. The father was sentenced to 12 years in prison.

Two decades later, French evangelical pastors and church leaders like Varak will have additional tools to help them better serve abuse survivors and address abuse in their own congregations.

Last summer, the National Council of Evangelicals in France (CNEF) published a booklet outlining three approaches—theological, legal, and practical—to fighting sexual abuse within the church and stating a code of ethics for pastors and elders at member congregations and mailed it to CNEF members. In December, the Protestant Families Association (AFP) announced it was partnering with the CNEF and two other French counseling organizations to create an online service independent of the church to help accompany victims.

“The reaction was very positive among our members,” said CNEF vice president Marc Deroeux, who oversees the project.

French evangelicals’ formal efforts to help churches minister to survivors of abuse arrived the same year as a 548-page report documenting abuse in the French Catholic Church. Following the work of the Independent Commission on Sexual Abuse in the Church (CIASE), the Catholic Church has agreed to financial compensation for victims of sexual abuse within its institutions.

The catalyst for the evangelical community’s work, however, comes from a desire for transparency amongst church leaders and members, say those behind the initatives.

The CNEF, which represents nearly 70 percent of evangelical places of worship in France, first began to track sexual abuse in member churches in 2019 and last year released its findings. Congregations self-reported three cases of sexual assault committed by church leaders and eight instances of pastors coming to the CNEF for advice on how to deal with sexual abuse within the church community.

“The pastor is often simply relocated to avoid further discussion,” she said of situations of sexual abuse in churches.

With a father who is an FPF pastor and a couples and families psychotherapist, Duval-Poujol grew up aware of the disappointing reality of the evangelical church’s reaction to abuse.

“The culture of protecting the institution at the expense of the victim must be stopped,” Duval-Poujol said. Statistically speaking, sexual abuse happens at a far higher percentage than the numbers reported by pastors suggest, she said. “That means that the women don’t feel safe enough to speak about it to their pastors.”

Varak also pointed out that, in his experience, sexual abuse situations are greatly misunderstood, both inside and outside the church. “The numbers [in my congregation] were just staggering,” said Varak about being a new pastor in Lyon. “[Around] 10 to 20 percent of the people in our [church] community had experienced some sort of abuse.”

This summer, the CNEF and AFP hope to launch a service d’écoute, or a listening service for victims of sexual abuse in the church, which will connect survivors to professional counselors.

“The listening service is there to welcome victims and allow them to speak out freely, and to provide people with resources,” said Marc Deroeux, vice president of the CNEF, who is overseeing the project. “It’s also there for organizations to know how to deal with abusers.”

Deroeux made it clear that the listening service will comply with all French laws, notably regarding cases of abuse against minors which will be handed immediately over to French authorities.

In addition to the CNEF’s brochure, the FPF is currently working on its own guide to dealing with sexual abuse in the church. Although the document has not yet been released, it will also serve as a practical tool for all French Protestant churches and members of the FPF.

Duval-Poujol pointed out that while sexual abuse in the church has been a taboo subject in many cultures, social movements have helped bring it to light. Now it’s time to provide proper resources.

“There’s a lack of training [in churches],” Duval-Poujol said. “The pastor either doesn’t believe [the victim] or he questions him/her. When all he has to do is listen to him/her. But #MeToo allowed people to believe the victims.”

A resounding theme of many evangelical leaders in France is that sexual abuse in the Protestant church is not necessarily institutional but rather hidden through shame and guilt. Many French church leaders find the liberation de la parole—opening up about taboo subjects and freedom of speech—with movements such as #MeToo a very productive thing for the church.

“CNEF’s work is a great first step. It’s the beginning of a [long] road,” said Duval-Poujol.

In order to properly distribute materials to educate its member churches, the CNEF is currently trying to publish its materials online to provide access to member churches. However, not all churches are aware of these efforts. CT reached out to four churches, none of whom had either received or were familiar with the CNEF materials.

For Florent Varak, the next step is taking practical actions. “When we built a new facility, we inserted windows on all doors to give a sense of transparency. We minimized the presence of any blind corners.” The church also requires thorough background checks for all staff in order to keep accountability among church members, and they have multiple CNEF posters hung in their church.

Varak is also willing to talk about these issues in front of his congregation. “If it were not for our conviction of the importance of expository preaching, I would probably never have preached about sexual abuses,” he said. “But since they are mentioned in some books of the Bible (Judges, 1 Corinthians, Esther), going through these sacred texts forces the conversation.”

“The real question is whether we have a systemic issue,” Varak said. “If our theology, or our culture, or our structure facilitates this kind of behavior.”

Perhaps that answer is both yes and no. Churches led by charismatic leaders without robust power-sharing policies can pressure people into silence.

“It’s rare, since the French evangelical scene is not as visible as in the US, but it happens,” said Varak. “The strong autonomy of each local church can facilitate an ‘in-house’ mentality—‘What happens in Vegas stays in Vegas’ sort of thinking.”

Varak emphasizes that because evangelical pastors hold no sort of authority to forgive sins through the practice of confession and absolution, they differ from Catholic priests who until 2021 often did not report cases of sexual abuse to French authorities. In that way, evangelical churches’ theology should actually prevent these types of cover-ups from happening.

“We have no sacramental authority for forgiveness, so we can’t minimize sin institutionally,” said Varak. “We also emphasize the priesthood of believers and the importance of being transparent with one another, which should prevent abuses from being masked.”