Evangelical farmer takes his technique from Niger to COP27 in Egypt, pitching a project in which “everything needed, God has already provided.”
Jayson Casper|November 10, 2022 11:50 AM
Français 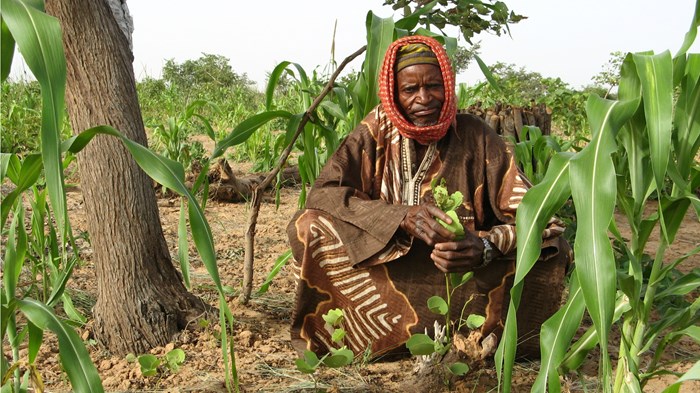 After 18 grueling months fighting desertification in Niger, Tony Rinaudo was near despair. As manager of a small reforestation project for SIM in 1983, he knew few of the 6,000 trees the missions agency had planted yearly since 1977 had survived the arid Sahel climate.

Locals called him the “crazy white farmer,” not wishing to waste valuable agricultural land on more failed efforts. But, trudging on, he loaded another batch of saplings into his pickup truck, struggling to fulfill his childhood prayer.

Years earlier in the threatened Ovens Valley of southeast Australia, Rinaudo lamented the bulldozing of hilly bushland and the killing of fish by drift from insecticides sprayed on tobacco plants—while children elsewhere went to bed hungry.

“God,” he cried out, “use me somehow, somewhere, to make a difference.”

Soon thereafter he stumbled upon I Planted Trees by Richard St. Barbe Baker. One line impressed itself upon Rinaudo, becoming his eventual life work.

“When the forests go, the waters go, the fish and game go, herds and flocks go, fertility departs,” he read from the 19th-century English botanist’s book. (The quote is attributed elsewhere to Scottish science journalist Robert Chambers). “Then the age-old phantoms appear stealthily, one after another—Flood, Drought, Fire, Famine, Pestilence.”

In 1981, Rinaudo settled in Maradi, 400 miles east of Niger’s capital, Niamey. The West African nation’s economic center, on its southern border with Nigeria, hosted SIM’s agricultural project, a hospital, and a local Bible school. Present since 1924, the mission—together with Catholics—established Niger’s largest concentration of Christians, though they numbered less than 1 percent of the population overall.

French colonialists and later international development projects contributed to environmental degradation through large-scale farming, clearing trees to maximize yield. Local farmers felled them further—out of poverty and hunger—to sell the wood, while women would walk miles to find kindling for their cooking fires.

As Rinaudo stopped to deflate his tires to traverse the sandy landscape for his delivery, he sighed and once again called out to God.

“Forgive us for destroying the gift of creation,” he prayed. “Show us what to do, open our eyes.”

Looking up, he spied a bush.

On any other desert trek, Rinaudo recounted to CT, he would have passed by similar-looking shrubs soon to be consumed by wandering goats. But this time, examining it closely, he recognized the small sprout as a Philostigma reticulata, a tree that could grow over 30 feet tall. Today the scientific community recognizes its ability to redistribute deep soil moisture to surface-level crop roots—often the difference between survival and failure in water-parched lands.

“Everything needed, God has already provided,” Rinaudo said. “Many deserts are altered landscapes with an underground forest that just needs a chance to grow.”

Planted trees lack the developed root system to survive non-shaded soil temperatures that can reach as high as 160 degrees and winds as strong as 35 miles per hour. But by gently pruning down the 30-plus shoots that emerge from a stump, water is concentrated into the strongest few that then grow quickly.

Pioneering “farmer-managed natural regeneration” (FMNR), Rinaudo next had to convince the community. It took a famine to do so.

In 1983, Niger was devastated by drought, and SIM launched a “food for work” project with farmers who would agree to try FMNR on a portion of their land. Rinaudo recounted how the initial 12 villages spread to 100, but following payment and harvest, 75 percent of beneficiaries cut down the new growth, returning to their traditional practice.

“We are finished with Tony and his ‘silly trees,’” they said.

But the 2,000 farmers who continued were enough to form a critical mass of practitioners, who influenced others. Over the next 20 years, the SIM project regenerated 200 million trees, increasing density tenfold to 40 trees per hectare. Crop yields improved by 30 percent, as shade decreased air temperature by 18 degrees and soil temperature by 65 degrees.

Animals and birds returned to the fields, and manure and urine joined with fallen leaves to nurture the ground beneath. Conversely, every 2 degree rise in temperature above 95 degrees results in a 10 percent loss of crop yield.

In 1999, Niger awarded Rinaudo its Agriculture Order of Merit for sparking the technique that would reach 50 percent of national farmland. And today, FMNR is practiced in 29 countries around the world, having restored forests to 17 million hectares.

Two billion more could be regenerated—the size of South America.

“Nature is the scaffolding upon which all life on earth depends,” said Rinaudo. “We are playing Jenga … pulling out the building blocks, one by one. If we continue, the tower will collapse.” 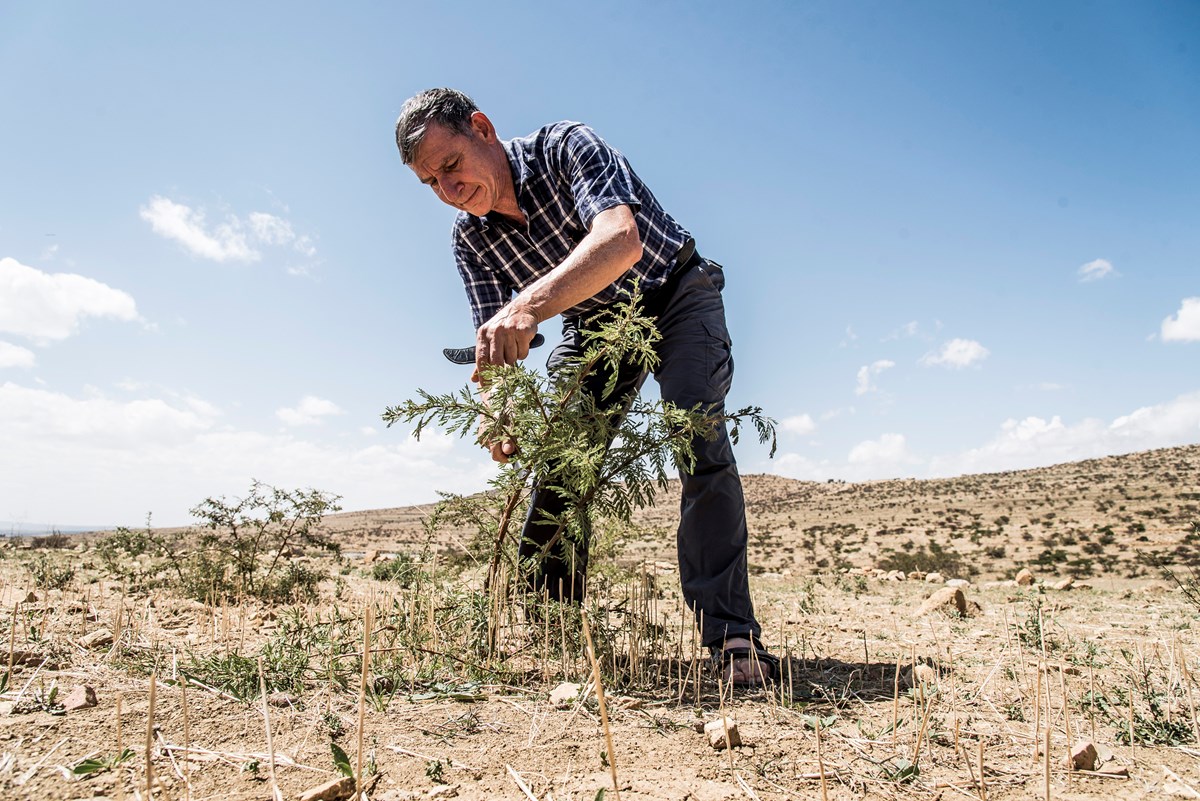 World leaders are meeting in Egypt this week to steady the foundation. The Red Sea city of Sharm el-Sheikh is hosting the 27th session of the Conference of the Parties (COP27) to the UN Framework Convention on Climate Change.

Rinaudo will be there, advising all he can.

Now working with World Vision as its principal climate action advisor, he will present at a side event with the German development agency GIZ and Australia’s DFAT (Department of Foreign Affairs and Trade), both akin to USAID. He will make the case that FMNR is a far more effective technique than spending millions in tree-planting reforestation.

A study tracking forestry programs from 1975 to 1982 noted a sum of $8,000 spent per hectare on trees judged ultimately to be “not doing well.” Another study brought expenses down to $400 per hectare. A typical FMNR project costs only $40–50, and sometimes as little as $4 per hectare.

After implementation, income from Niger’s associated farms rose $68 per hectare. Studies from Ghana and Senegal showed increases of 78 percent and 84 percent, respectively.

Far greater is the value of a human soul—though Rinaudo rejects a dichotomy.

“People came to the Lord, but I’d like to reframe the question,” he said. “I see repairing and caring for God’s creation as God’s work in its own right, as an act of love.”

SIM served all, regardless of response. They witnessed appropriately, and some small churches emerged. One friend, Sule, a devout Muslim, became a key employee and frequently engaged staff in conversations about religion, patiently answered by his Nigerien supervisor. Yet, respected in his faith, he was never pressed to attend devotions or prayer meetings.

It was an act of simple hospitality to his father—providing lodging while facing an operation—that made the key impression. Sule prayed to know the truth, and God gave him a vision of Jesus.

As he was already a respected leader in the community, the change in Sule’s life attracted the attention of many, including Jadi, the village drunk. He asked: Is this “fair dinkum”—as Rinaudo related the inquiry, using an Australian idiom—or is it just to keep your job?

Sule gave witness and told Jadi to seek God himself. Jadi prayed, receiving a different vision—of himself in a pit, surrounded by snakes. He repented, believed, and to this day is a transformed man.

“When you are a missionary with SIM, people expect you to be an evangelist,” said Illia Djadi, Open Doors’ senior analyst for freedom of religion or belief in Africa, who attended the same church as Rinaudo in Maradi. “Tony didn’t carry a Bible or set up any church—but he left a legacy.”

Djadi praised the “whole gospel” emphasis that led Rinaudo also to live in the city with the people, unlike many missionaries who stayed on the SIM compound. He spoke Hausa fluently and coined a proverb he constantly repeated: “He who cares for the trees will never go hungry.”

Djadi compared Rinaudo to John the Baptist, with love, compassion, and the pre-evangelism necessary to bring Muslims to Jesus. But the impact went further.

In the 1990s, Islamic fundamentalism surged in Niger. Preaching against Christians began to undo traditional religious tolerance and radicalized many in the youngest nation in the world.

And in 2015, the cartoon defamation of Muhammad—which sparked the Charlie Hebdo terrorist attack in Paris—resulted in hundreds of attacks on churches, schools, homes, and even an orphanage. But in Maradi, Muslim neighbors surrounded the SIM properties, defending the “good people” inside.

“To fight against intolerance, we need local relationships of trust, to develop the mindset that Christians work for the good of others,” Djadi said. “We do not need more evangelists, but more Tonys.”

Coming soon to the United States, Rinaudo’s book, The Forest Underground: Hope for a Planet in Crisis, won the 2022 award for Australian Christian book of the year. His key verse is Psalm 104:30—“When you send your Spirit … you renew the face of the ground.”

The Forest Underground: How an Australian ...