LEADERSHIP asked Charles Colson what the local church can do to help solve the prison problem. Following are his suggestions.

Let's start with the proposition that if every church in the United States would adopt an inmate, our problem would be solved. Theoretically that's true, but we're a long way from being able to achieve that. Mayor Koch tried to do that with the 35,000 homeless people in New York; he challenged the churches to help. All the churches did was raise practical problems about why it wouldn't work. In my opinion, both sides were wrong. The churches adopted a wrong attitude, and the mayor oversimplified a terribly complicated problem.

I happen to believe the church today does need to broaden its horizons to work more and more in meeting human needs. But it can't instantly pick up all the government welfare programs that took fifty years to build.

We're going to have to raise up and train probably 100,000 volunteers before we will make a dent in some of the major social problems such as criminal justice. And we'll have to put up with the grossly inefficient government bureaucrats a little longer ... 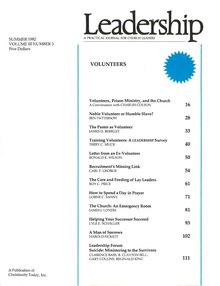 This article is from the Summer  1982 print issue of Leadership Journal. Subscribe to continue reading.