A defense of an old-fashioned idea.
Ben Patterson

He was a Christian, a pillar in the community, a world-renowned physician, an exemplary family man, and he was elected to serve a three-year term as elder. I was just out of seminary at the time, a new member of the church staff. One evening my wife and I were invited to his home for dinner. During our time together, he confided to me that he really didn't have time to attend the elder meetings, but he thought that was excusable, given his demanding schedule. What was important, he said, was that his name be connected with the church.

I admit that sounds awfully conceited of him, but at the time it didn't seem so. He was such a gentleman.

He finished his three years attending less than a fourth of the meetings. A new slate of elders was elected. One evening about three months after his term had ended, this gentleman showed up at an elder meeting. Everyone was glad to see him but a little puzzled over why he was there. Finally, someone asked him. 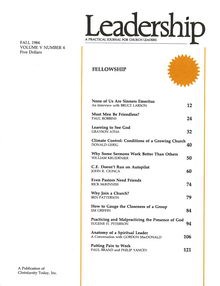