We had finished the game two hours earlier and were sitting at a large, round table in Luigi's. Pizza had been ordered; in the meantime we were sipping soft drinks or beer.

The air in Luigi's was wet and warm. Other softball players, some from our team, many from other teams, crowded the tables around us. The sweat from the game was only partially dried, adding to the locker room atmosphere; but the effect was not at all unpleasant. It was happy camaraderie, a cave-like sense of well-being, isolated from the outside world.

Loud conversation filled the room. The subject was softball. At our table, we replayed our victory in detail, playfully chiding those who had made mistakes, congratulating the night's heroes. Other nights the talk might have been of defeat, and we would have agonized over those same mistakes and wondered "just what's wrong with our ball club?"

In either case the talk was sincere and easily understood by everyone. We were teammates, and teammates behave that way.

Outreach
Success in Three Churches: Diversity and Originality
Tom Minnery reports on three churches that are radically different from one another, yet successful in light of their view of mission.
Tom Minnery
Trending 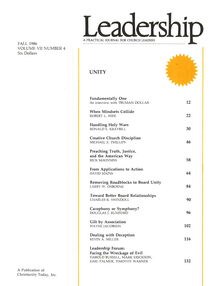