An interview with James Dobson
Dean Merrill and Marshall Shelley

America's premier spokesman for the family is the son, grandson, and great-grandson of pastors. His voice is now heard by more people each week (on eight hundred radio stations, thirty minutes daily) than his three forebears probably addressed in their lifetimes.

But James Dobson began his career with a Ph. D. in child development from the University of Southern California, and then served on the attending staff of Children's Hospital of Los Angeles for seventeen years. He was also associate clinical professor of pediatrics at the USC School of Medicine for fourteen years.

His commitment, however, was to families. He has written over a dozen books on family topics, and his 1978 film/video series "Focus on the Family" has been seen in countless churches. A six-part sequel called "Turn Your Heart toward Home " is being released this month.

LEADERSHIP Senior Editors Dean Merrill and Marshall Shelley went to the Focus on the Family offices in Arcadia, California, to explore Dobson's roots in ...

It’s Not About Gay Rights
If the church doesn't shepherd people through questions of sexual identity, sociology and psychology will.
Chris Blumhofer
Trending 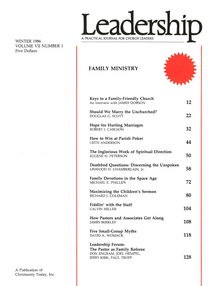 This article is from the Winter  1986 print issue of Leadership Journal. Subscribe to continue reading.