A nationwide study reveals what pastors make--and how they feel about it.
James Berkley

In 1825, about the time Abraham Lincoln was splitting rails, 18-year-old frontier preacher Elijah Goodwin wrote, "I did not think it was right to preach for money; still, I thought a little money was very convenient when it came to paying ferriage at the rivers. In traveling and holding protracted meetings with others, I learned that preachers who said the most against paying preachers received the most money for their labors. Perhaps this was because, in preaching this way, the attention of the brethren was directed to the subject. I never took any part in this kind of preaching, and therefore got but little money."

Once, when Goodwin was to travel several days from extreme southern Indiana to northwestern Illinois to preach at a camp meeting, someone asked him how much money he had for the trip. "I told him that I had just twenty-five cents," Goodwin replied. "To this sum he added another quarter. … About dark [on the first day] I stopped at a public house and got my horse fed, ...

News
Trump Becomes the First President Since Eisenhower to Change Faiths in Office
Like many Christians switching churches, he now identifies as nondenominational
Daniel Silliman
From the Magazine

Preaching
Your Preaching Is Not God’s Work. You Are God’s Work.
How inner transformation shapes outward proclamation.
Todd Hunter 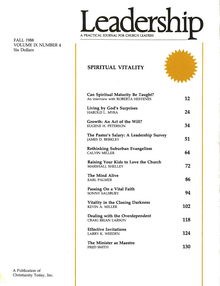