The fine art of getting people at odds to talk--productively.
Chip Zimmer

A Christian couple I know recently completed their divorce. It required more than two years of difficult and increasingly bitter negotiation. Although they tried not to, they wound up in court anyway, and neither liked what the judge told them they had to do.

They spent thousands of dollars they couldn't afford on attorneys' fees. Their animosity toward each other spilled over into other relationships. Their once-close families have become estranged, and the couple now communicates only by letter. Sadly, both the fact of their divorce and the manner in which they pursued it have seriously eroded their Christian witness, and each party feels resentment and contempt for the other.

Did it have to end this way?

Contrast their story to that of another couple. When I met them, Dave and Sharon had been separated two months. They greatly mistrusted each other as a result of long-term disagreements over money. Dave was used to living on credit, while Sharon paid for everything in cash. During their ... 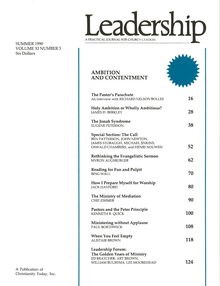 This article is from the Summer  1990 print issue of Leadership Journal. Subscribe to continue reading.