When a Leader Falls
BCLStore.com

Missionary David Brainerd was astonished by the Spirit's work.
compiled by Kevin A. Miller

Though he did not live to age 30, David Brainerd became one of the most influential missionaries in American history. Born in 1718, Brainerd was headed toward a life of farming in his native Connecticut when he was converted at age 21. After studies at Yale College, he was ordained a Presbyterian missionary in 1744 and began serving Native Americans in New York, New Jersey, and Pennsylvania.

In 1745, while Brainerd was preaching among the Delaware tribe, a revival began. Here, condensed from his Journal, are Brainerd's descriptions of his own inadequacy and the Spirit's remarkable work. As they reveal, God often works after many days and months of preaching seem to have borne nothing. And when God moves, one evidence is that people are given a genuine concern for their spiritual condition.

Lord's Day, January 27. Had the greatest degree of inward anguish that almost ever I endured. I was perfectly overwhelmed and so confused, that after I began to discourse to the Indians, before I could ... 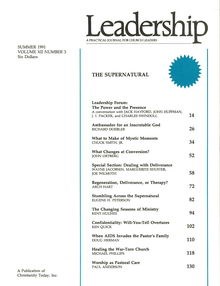