August 1989 was a warm month to hear chilling news. The morning Richard Strauss and his wife, Mary, strode into the doctor's office, they were braced for bad news but not for the grim journey on which they were about to embark.

Just six months earlier, while tussling with his grandkids, Richard felt one of his ribs pop. The pain was a nuisance but tolerable, and he mentioned it to Mary but pushed the pain aside. A few months later, while squeezing a metal trash can to cram the lid back on, Richard felt the same pop and pain. He dismissed the incident as he had earlier.

Summer soon arrived, and Richard, pastor of Emmanuel Faith Community Church in Escondido, California, was speaking at Camp of the Woods in New York. When he visibly struggled to lift a suitcase into the car trunk, Mary urged him to see a doctor. Only weeks later, while reaching for his Bible to preach at a conference in Oregon, he felt another rib pop. He saw a doctor right away and immediately was marched through a battery ... 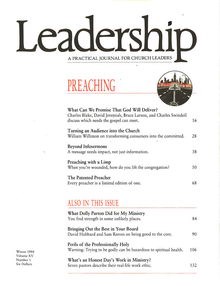