An interview with Gardner Taylor and Lee Strobel.

In 1990, the year Gardner Taylor retired from preaching, Lee Strobel began to preach. By that time, Taylor had pastored historic Concord Baptist Church in New York City for 42 years. Today at 77 he still preaches almost every weekend, while Strobel regularly fills the Plexiglas pulpit at Willow Creek Community Church in South Barrington, Illinois.

Taylor preached in a heyday of American preaching, when New York City pulpits were filled with the likes of George Buttrick, Robert McCracken, Fulton Sheen--and Gardner Taylor. In 1980 "Time" magazine declared him "dean of the nation's black preachers." The "Christian Century" recently quipped, "What was once alleged of Southern Baptist preacher Carlyle Marney may equally be said of Taylor: he has a voice like God's--only deeper."

Throughout his ministry Taylor's love of preaching was surpassed only by his love for Laura, his wife of 52 years. "I sometimes see her lying in repose now," he said, "and a great sadness comes over me because I know ... 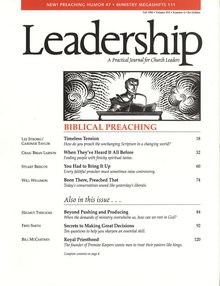