I confess to sporadic bouts of doubt and cynicism. These intrusions of carnality into my pastor-heart spring from the temptation to play the church numbers game, creating my pastoral self-image based on attendance figures.

I thought when I finally led a large congregation I'd be able to shed the demeaning sense of inadequacy the game provokes in me. Not so. I still wrestle at times with a hideous smallness in my soul, just as I did years ago when Anna and I planted a church that zoomed from zero to forty-five in four years.

I began to doubt my motives when I found comfort in reports that another pastor had a setback. I grew irritated over the practice of those who glibly rounded off numbers. (Apparently nobody ever had 484 in attendance, only 500).

I lived in the shadow of three-digit attendance figures. I thought the day I broke one hundred, a peace would fill my soul. When it happened, solace was temporary, and soon I was haunted again. Only the numbers had changed. 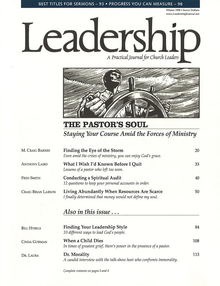 This article is from the Winter  1998 print issue of Leadership Journal. Subscribe to continue reading.