Conventional wisdom says teens don't like church because they find it boring. So they must be lured in with entertainment. Apparently, that strategy failed. A study published the Barna Group shows 61 percent of American twentysomethings attended church as teens but no longer attend, read the Bible, or pray.

"The point (was) not to do anything too weighty that would turn kids off," Chanon Ross, youth director at Knox Presbyterian Church in Naperville, Illinois, said, challenging the concept in an essay titled "Jesus Is Not Cool." The old goal was to "keep it light; keep it fun … while simultaneously conveying a positive, family-friendly alternative to things like MTV." Ross blames this for the exodus. In that environment, "teens don't need Jesus to be crucified and raised from the dead in order to have positive outcomes and pursue family-friendly alternatives to MTV."

Even more alarming, many teens are now unable to differentiate between the gospel and the pop-culture box they receive ...

Discipleship
People Aren't Projects
...and other lessons I learned as a rural pastor.
Brad Roth
Trending 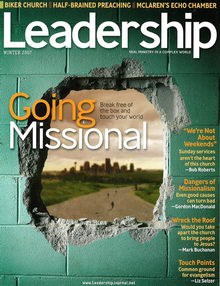 This article is from the Winter  2007 print issue of Leadership Journal. Subscribe to continue reading.