Does God want you to have a better sex life?

A number of churches are now preaching a message I never heard from the pulpit growing up: God wants you to have sex. Lots of sex. Great sex. All for his glory, of course.

In February 2008, Relevant Church of Tampa, Florida, issued a "30-Day Sex Challenge" during their sermon series on relationships. Married couples were exhorted to have some form of intercourse - and singles to abstain - every day for a month.

Last month, New Direction Christian Church (Memphis, Tennessee) conducted its own "40 Nights of Grrreat Sex" program. The pastoral staff handed out daily planners with suggestions for mixing things up. They set up a blog so members could ask questions - and presumably offer advice - anonymously. I hope they also have plans to increase their children's ministry budget in the coming months.

And it's not just churches. In the Christian publishing market, the body of explicit sex manuals for Christian couples is growing. Ironically, about the time secular commentators have begun to voice ... 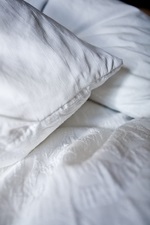