His understanding of the gospel led him to build a multi-ethnic megachurch. And now it's leading him to build smaller churches he calls "verges."
an interview with David Gibbons

David Gibbons had an unlikely education for someone who would pastor a multi-ethnic church. Growing up in a fundamentalist church, he attended one of fundamentalism's flagship schools, a university with a policy at that time against inter-racial dating. "There were many great things about the school," he says. "The speech and arts programs were phenomenal, the academic standards were high, and they had a lot of women! I thought my chances were pretty good." But David was quickly informed of the school's policy against inter-racial dating. "I complicated things for them," said David, "because my dad was white; my mom was Korean. I'm inter-racial!" The school told him he had to choose between Caucasian or Asian. He couldn't date both. Eventually David met the woman there who would become his wife. She is Caucasian and American Indian. Today David is pastor of NewSong Church, which he planted in Irvine, California, in 1994, with multi-site locations in Los Angeles, North Orange County, Dallas, ... 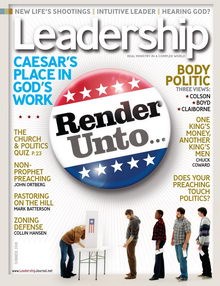