What to do, and not do, when reaching out to Muslims
An interview with Naeem Fazal

Some estimate that Muslims comprise about one percent of the U.S. population, but due to immigration and conversion they are one of the fastest growing groups in the country. Naeem Fazal was raised in Kuwait and came to the United States shortly after the country was liberated from Iraqi occupation in 1991. Today he is the lead pastor of Mosaic Church, a multi-ethnic congregation in Charlotte, North Carolina. We spoke with Fazal about his supernatural conversion from Islam to Christianity and what others should do, and avoid, when reaching out to Muslims.

What were the key factors God used in drawing you to faith in Christ?

First was community. I found community in a group of Christians through Fellowship of Christian Athletes (FCA) in college. We developed great friendships even though I was a Muslim.

Second was spiritual environments. I attended midweek gatherings on the college campus and weekend services at different churches because of my friendships with these Christians. I even attended ...

Discipleship |Outreach
Tell the Redemptive Story
Help children discover their place in both the joyful and painful parts of the biblical narrative.
Amy O'Brien
Trending 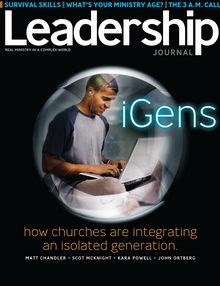 This article is from the Summer  2009 print issue of Leadership Journal. Subscribe to continue reading.