Churches are rediscovering their neighborhoods as fertile mission fields, and they're forging dynamic connections with community leaders and organizations. An example is happening in Lents, an under-served neighborhood in Portland, Oregon.

Neighbors in the numbers

If Portland conjures up images of vegan food carts, fixed gear bikes, and activist hipsters, pause for a moment. Lents is in the rough part of the city's Eastside, described by Willamette Week as "a landscape of chain link and surface parking … so devoid of landmarks, public spaces and commercial centers that some residents simply call it The Numbers."

The once independent community was absorbed by the expanding city, and eventually halved by an unpopular interstate freeway, and is now a high density multiethnic neighborhood (45 languages are spoken in a local elementary school). Infrastructure is poor, crime is high, and nobody seemed to care. At least nobody used to.

Now community partnerships are springing up between Lents's ...

Outreach
Skye Jethani: Recipe for Church-365 (Part 4)
What if your church gave volunteers, leaders, and money to other churches' ministries- on purpose?
by Skye Jethani
Trending 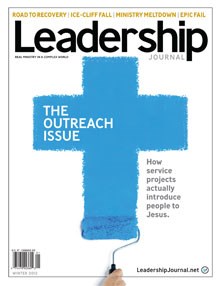