For the late evangelist, the time after the sermon was about getting people into church.
David Neff 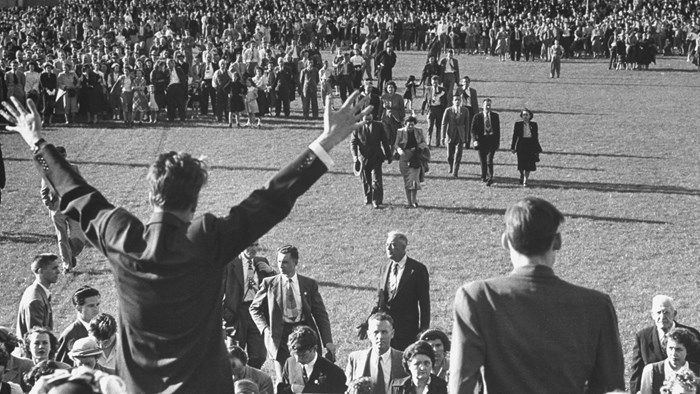 An evangelist came to town when I was just a freshman in high school. He needed an organist. So my pastor made arrangements for me to help out.

“When I get to the end of my sermon,” the evangelist told me, “I’ll start to move my fingers like this.” He wriggled his fingers like a mass of night crawlers in a bait can. That was the cue, he explained, for me to begin to play some comin’-to-Jesus music very softly and tenderly—and to gradually increase the volume as he turned up the emotional pitch of his invitation.

I had sat through many altar calls before. But now that I was part of the team, I learned just how well engineered these invitations were. We carefully followed a precisely formulated sequence designed to move people out of their seats and down the aisles.

In 1969, Billy Graham came to Angels Stadium in Anaheim, California, when I was a fresh-out-of-college youth pastor. I decided to take a dozen or so teens to hear Graham preach.

When we eventually found our seats, Ethel Waters was giving her testimony just before singing her trademark tune, “His Eye Is on the Sparrow.” I remember very little about Billy Graham’s sermon, but his altar call burned itself into my memory.

The choir, predictably, sang “Just As I Am,” and the counselors moved out of their seats and onto the playing field, ready to instruct and pray with those who would be making decisions for Christ. This invitation, too, was carefully orchestrated—orchestrated for order and efficiency, but not to wrench our emotions.

Graham spoke with quiet confidence: conviction that God was moving on the hearts of many people there that night, assurance that they would want to come down front for prayer and counseling, certainty that the Holy Spirit, not the evangelist, was doing the work of conversion.

This calm and confident evangelistic invitation was in sharp contrast to what I had seen in my teens. And over the years, I saw Billy Graham repeat it on several continents.

Billy Graham’s own conversion lacked the gut-wrenching emotions that characterize the paradigmatic stories of American revivalism. Charles Finney, for example, wrote that he “wept aloud with joy and love” and “literally bellowed out unutterable gushings of [his] heart. . . . [W]aves came over me, and over me, and over me, one after the other, until I recollect I cried out, ‘I shall die if these waves continue to pass over me.’ ”

Graham understood that what was important was not emotional Sturm und Drang, but making a commitment to following Jesus—and then following him. What Graham wanted to reproduce in others was not the feeling of being saved but the commitment to follow Jesus. The late Baptist evangelist and scholar Lewis Drummond argued in The Canvas Cathedral that Graham had a broad understanding of evangelism. He quoted Graham as saying, “Evangelism is more than simply encouraging decisions for Christ. It is urging people to become disciples, followers of Jesus Christ.”

The careful planning of a Graham invitation had to do with more than efficiently moving people from their seats to the infield. It was part of a larger plan to effectively integrate people into churches and to equip them for the first steps of discipleship.

When I covered Graham’s 1991 crusade in Buenos Aires, I asked some local ministers why they had invited Graham to preach in their soccer stadium. “We don’t need Billy Graham to get people to make decisions for Christ,” one of them said to me. “We need Billy Graham to teach us how to keep converts in our churches.”

At the time, Argentina was noted for several gigantic congregations. But clergy close to the situation told me that these churches were desperately trying to close the back door. One particular preacher, a businessman who had experienced a sensational conversion, was known for his one sermon—a powerful testimony capped by an altar call. But after he got people to walk down the aisle, he didn’t know how to keep them walking with the Lord.

As Graham said, “Parents do not abandon a baby at birth, but nourish and protect the life of that child. So evangelists are to assume responsibility for those born into the family of God under their ministry.” And in his quiet, confident way, Graham partnered with pastors to make that happen.

David Neff was editor in chief of Christianity Today, where he served from 1993 to 2012.