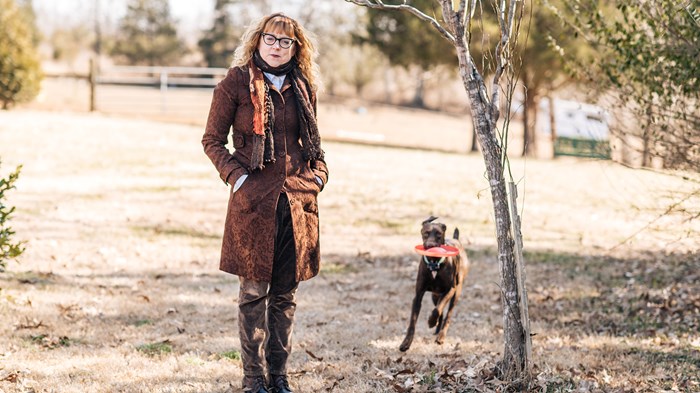 “Suppose one of you has a hundred sheep and loses one of them. Doesn’t he leave the ninety-nine in the open country and go after the lost sheep until he finds it?”

Jesus means these words, found in Luke 15:4, metaphorically. Speaking to the Pharisees about his penchant for keeping unsavory company, Jesus is really talking about lost sinners, not sheep. But the power of a parable depends upon our ability to understand it first on the literal level. Only when we understand the surface meaning of a symbol can we begin to grasp its deeper truth.

One year ago, I came to understand this parable as I had never understood it before.

When my dog slipped out one night and into the woods, we dropped everything to find her. Hours of searching turned into days. Each waking moment (which was most of them) was spent searching. Tramping through woods. Driving down country roads. Knocking on doors. Calling animal shelters. Handing out flyers. Sharing on social media. And praying.

While I prayed, neighbors opened their doors to knocking, took flyers, nodded sympathies and promises. Strangers arrived to help look. Friends near and far prayed and prayed and prayed. Perhaps even you. Remember?

Of the countless homes in our community we stopped at and countless people we spoke to, I remember one in particular. We stopped at a doublewide surrounded by rusting machinery and ancient vehicles. A big-bellied shirtless man was working outside while his wild little children ran about the yard. He looked at my husband and me curiously as we left our car and approached him with a flyer. His hard face softened as he listened to our tale of woe. He urged us not to give up and told us of his own dog who had once been gone for two weeks before coming home. “Dogs are like your children,” he said tenderly, and all I could do was nod quietly lest I burst into tears again.

“Can you imagine what it would be like to lose a child?” my husband asked. I could hear the lump in his throat.

“No,” I whispered, thinking of the mothers and fathers in our community whose daughters had not come home until their bones were found in shallow dirt. There is so much unimaginable suffering on this earth. Only God is wholly good.

The picture I will never get out of my mind is of me, standing in the woods behind our house, next to the railroad tracks, which are next to the highway, calling over and over into the thick bramble and brush, “Ruby! Ruuuuby! Ruuuuuuuuby!” But all I hear back is the sound of crying. My own crying.

Every night, I listened to the coyotes.

Every day, I watched the sky for buzzards.

I could barely eat.

I thought about all the other prayers. Not the prayers for a lost dog, but the prayers for dying infants, broken marriages, wounded soldiers, tortured victims, hardened hearts, lost souls. Why should God give me the desire of my heart when so many others are denied?

I awoke that morning, begging God, Please let it be today, God. Please bring her home today. Please. I cried all the way through church, through a message about giving up our striving and giving things over to God. “Are you at church?” a friend texted me during the service. “This sermon is for you.” I knew it was.

A neighbor had walked out her front door to find Ruby lying on her lawn, injured and unable to get up. We raced there, and I dropped onto my knees in a prayer of Thanksgiving.

Ruby lifted her head and kissed my face.

Broken. So broken. Yet, once lost, now found. Now home. I lifted my head to the Lord in ineffable thanks. Jesus’ words struck home.

“And when he finds it, he joyfully puts it on his shoulders and goes home. Then he calls his friends and neighbors together and says, ‘Rejoice with me; I have found my lost sheep.’”

When they heard the news, friends from near and far rejoiced with me.

A few weeks later, while Ruby was recovering nicely (she had been hit by a car, likely on the first day she went missing), I was out jogging when an old pickup pulled up alongside me, its window lowering.

I glanced over, expecting to give directions to someone who was lost. “Did you ever find your dog?” the driver asked. It took me a second before I recognized the burly neighbor who’d urged us not to give up hope.

I gave him a great grin and shouted, “Yes!”

“I’m so glad to hear it!” he said, and the warmest smile came across his weathered face, as he rejoiced with me.

Karen Swallow Prior is a professor of English at Liberty University and a research fellow with the Ethics and Religious Liberty Commission of the Southern Baptist Convention. She is the author of Booked: Literature in the Soul of Me and Fierce Convictions: The Extraordinary Life of Hannah More.