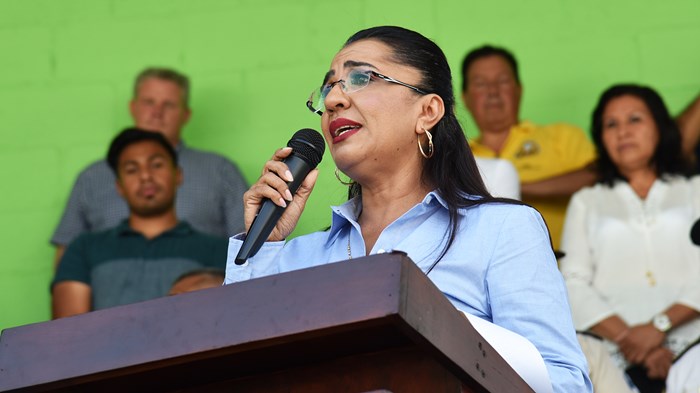 In the so-called Northern Triangle of Central America, the countries of Honduras, El Salvador, and Guatemala form a violent triad. The murder rate is higher in this region than in most active war zones. Gangs, cartels, and vigilantes impose their will, taking over or co-opting legitimate police forces and routinely terrorizing average citizens. A recent study identified 54 separate criminal groups in Guatemala alone. For many citizens of this region, fleeing north through Mexico to the US border is a less risky proposition than dealing with daily life in their hometown.

In the middle of this violence sits the town of San Cristóbal Acasaguastlán, a picturesque oasis of calm with a population of about 6,000 people. What sets this place apart are the efforts of Jeaneth Ordoñez, the Christian mayor who has united the townspeople in their quest to keep the municipality free of the violence and upheaval that surrounds them.

“This is a very special place,” says Eduardo Gallo, a Cuban-born medical doctor whom Ordoñez brought to town to help with health care. “We have the opportunity to improve people’s lives and to do it with love. The mayor has created a remarkable environment.”

Ordoñez’s motivation to protect and provide for her people comes directly from her faith. “God has put me in this place and given me a love and desire to serve my people and make their lives better,” she says. “I have faith in God and I love the people.”

About two hours outside of Guatemala City, the municipality encompasses a small town and a large rural area where high unemployment means poverty is all too common, as it is throughout the country. But Ordoñez casts a big vision and has already made huge strides in improving health, education, sanitation, and clean water.

San Cristóbal Acasaguastlán is the only town in Guatemala with 100 percent literacy. Edna Galicia, a local teacher, reports that “many families here are living in poverty, but they know education is important so they make it a priority for their children.”

On the health front, the mayor convinced Gallo to come for a year to help set up a more effective health care system. (When his contract ended, he chose to stay on.) San Cristóbal Acasaguastlán was also recently chosen as a pilot site for a Pediatric Antibiotic Initiative, a partnership between MAP International and Food for the Poor that supplies free pediatric antibiotics to patients in need. The program requires careful record-keeping and follow up with patients, something the town’s clinic is able to provide.

“We believe that supplying pediatric antibiotics to this municipality can help them improve the health of their children and provide even more excellent care,” says Steve Stirling, president and CEO of MAP International.

Mayor Jeaneth, as she prefers to be called, regularly walks around town and is embraced by young and old as she stops to listen to a story or a request from one of her citizens. “I know most of the people and they know me. We are building a better life together.”

When asked how she works so tirelessly, she says simply, “God gives me the strength.”

Of the 340 mayors in Guatemala, Ordoñez is one of just 11 women. In the male-dominated culture of her country, many women to this day must ask their husband’s permission to leave home or allow visitors to enter, so her female leadership stands out. “As a woman, I have passion and capacity to see the needs of people,” says Ordoñez. “But I know I have to work extra hard because there are many who expect a woman to fail at doing a job that is traditionally a man’s.”

As a young adult, Ordoñez had ambitions to leave her small town behind and head to the capital of Guatemala City. But, as she says now with a big smile, “God had his plans.” After leaving San Cristóbal Acasaguastlán, she attended university and then worked in business. After some years, she felt drawn back to her hometown by the tranquility of life there and by her family. When she returned, she also met a man named Samuel Arroyo, who had grown up in a town nearby but came to San Cristóbal Acasaguastlán to teach.

Twenty-five years later, Arroyo now works alongside his wife, helping implement her initiatives and supporting her in every way. “God has given us this platform to help people and to fight injustice,” he says. “It’s a privilege to help my wife and to serve God this way.”

Ordoñez’s road to the mayor’s office was itself an act of God, she says. While pregnant with her third child, she lost her sight. “I had swelling that put pressure on my optic nerve and took away my sight. When the people of the town heard about my condition, they came to pray for me.

“The outpouring of love and support was so great that I was overwhelmed. I vowed to find a way to give back to the people,” says Ordoñez.

After delivering her baby, her sight was mostly restored and she took a job in the municipal government. “I simply wanted to help the people of my town. I had no intention of trying to become mayor.”

In 2007, when the current mayor of the town was running for re-election, she helped lead his campaign. Weeks before the election, he was murdered while visiting a nearby town.

“We were all devastated,” says Ordoñez. “And then I was shocked because the people of San Cristóbal Acasaguastlán asked me to become the candidate. Samuel and I prayed and thought about it, knowing it was not an easy job and it was also dangerous. We knew our lives would change forever if we said yes.”

Ordoñez agreed to run for office and the people elected her with an overwhelming vote.

After being elected, then re-elected, she has implemented various initiatives to help the townspeople and also to draw interest from tourists and outside business. “Unemployment continues to be a challenge,” she admits. 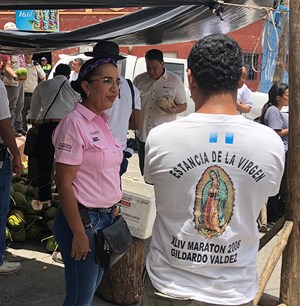 Security also poses a significant challenge. Being a mayor of any town in Guatemala means being the target of criminal factions and cartels that are constantly vying for control of the region. In San Cristóbal Acasaguastlán, Ordoñez and her husband have had their house sprayed with bullets. She now walks around town with an armed security team and admits that her life is often in danger.

The US Embassy in Guatemala has helped by supporting a model police precinct and providing security cameras at the entrance and throughout the city as part of the US State Department’s Bureau of International Narcotics and Law Enforcement Affairs (INL).

For Mayor Jeaneth, the help from outside organizations is “an amazing blessing” for which “we are so very grateful.” But she emphasizes that she and the citizens of San Cristóbal Acasaguastlán know that their ultimate support comes from God.

“If we are a success, it is because we bend our knees to God and he has blessed us,” she says. “We must never forget that he is the source of all good things.”

Dale Hanson Bourke is the author of The Skeptic’s Guide series (IVPress) including Immigration: Tough Questions, Direct Answers. She lives with her husband just outside Washington, DC. You can find her at DaleHansonBourke.com and on Twitter.