In a world of hookups and cohabitation, he took a leap—and made an act—of faith.
Rebecca Brewster Stevenson 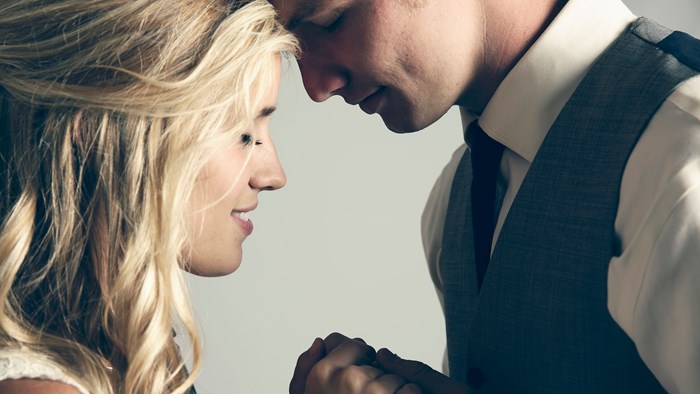 Our firstborn got married this past July, and we are overjoyed for him and his wife. They’d dated long-distance for two years. After hours-long Skype conversations and scads of money spent on air travel, they were more than ready to tie the knot and start their life together.

All four of us newly minted in-laws are in full support of this marriage. We have watched our children bloom within this relationship. We see them bring out the best in the other. We know they are earnestly following Christ.

These details have garnered more than a few raised eyebrows. Surely they would have been best served by his finishing his undergraduate degree before they married. He may want to attend graduate school. Isn’t it a bit early for marriage?

We live in a highly educated area with several universities just down the road. My husband and I both have graduate degrees. The truth is, we don’t come from a demographic that generally supports marriage at this point in a person’s life.

Marrying this young isn’t just odd for our demographic—it’s countercultural across the board. Men have typically waited until their mid-to-late-20s for marriage, and the common marrying age for women has been on the rise for a century. According to The New York Times, “the median age for marriage in 1890 was 26 for men and 22 for women. By the 1950s, it had dropped to 23 for men and 20 for women. In 2004, it climbed to 27 for men and 26 for women.”

Then in 2013, the Knot Yet Report revealed that those averages are higher still: Couples now are postponing marriage to age 29 for men and 27 for women. The delayed marriage trend appears to come with some excellent effects, including decreased divorce rates and increased incomes for college-educated women.

Why, in light of this, would we not merely acquiesce to this very young marriage, but wholeheartedly encourage it? What of the risks? The potential for divorce? The unavoidable struggles of navigating early adulthood compounded by this life-changing decision? As parents, we are hard-wired against risk. For two decades, we have tallied the potential perils in schools, sports, and organic milk. We want the very best for our children, so why would we support this countercultural choice?

The prevalent message in our culture is that young adulthood is the time to build a foundation for a healthy life. Those in their early 20s are encouraged to pursue education, travel, and gain life experience, all unhindered by wedlock. Marriage is viewed by many as something that comes only after adequate time to develop personal identity and establish a strong financial footing.

But inherent in this delay is a reality we as parents are very cognizant of: Young adults, like all of us, are sexual beings. When marriage is delayed, so is the opportunity to experience sexual intimacy within God’s parameters of a marriage covenant.

Our son and his wife found each other early in life. They desired true intimacy, with all of its difficulties and privileges, including sexual expression. Obedience to God, then, for them meant marriage—and trusting that God will be faithful to them in the risks and challenges they may face as a young married couple. As parents, we believe that, in the case of our son and his wife, early marriage was their best, healthiest, and only faithful option—one that stands in stark contrast with the prevalent trends of sexual expression among young people today.

While there are certainly young adults, Christian and non-Christian, who choose sexual abstinence, many today are sexually active long before marriage looms. A 2015 report by the Centers for Disease Control and Prevention found that approximately 41 percent of high school students report having had sexual intercourse. This is actually a downward trend from recent decades; in 2009, nearly 50 percent of all high school students were sexually active and almost 70 percent would be by the time they were 18. While a smaller percentage of teens are sexually active today, the number that are is still significant. One can expect that a sexually active teenager will continue this activity into young adulthood, married or not, while many others who were not sexually active as teenagers will become so—again, married or not. This gives rise to a variety of sexual experiences among young adults, one of which is the casual sexual encounters within “hookup” culture.

A hookup is a conflicted concept from the start. Perhaps best defined by author Donna Freitas as unattached intimacy, it doen’t necessarily assume intercourse, but the interaction between partners is sexual and is, by definition, free and unassociated. In The End of Sex, Freitas clarifies that a hookup requires unattachment and the active suppression of emotion. Partners must “drain themselves of feeling.”

At best, the concept of unattached intimacy seems an oxymoron—and yet, according to both Freitas and Lisa Wade, author of American Hookup: The New Culture of Sex on Campus, this is the social currency on most college campuses today. Further, in her Atlantic article “Boys on the Side,” Hanna Rosin lauds hookups as empowerment for young adult women, who through them can enjoy “sexual adventure ... and temporary relationships that don’t get in the way of future success.” While I wholeheartedly endorse the future success of women, a hookup’s potential emotional toll—for both women and men—is more than concerning.

But hooking up is not the only option available to young un-marrieds; others pursue sustained, quasi-committed dating relationships that may flounder, eventually lead to marriage, or that may continue in limbo indefinitely.

Not long before our son’s wedding, a 20something colleague of my husband asked if it was wise for our son to marry when still a virgin. How could he decide whom to marry before he’s had sex with her—or anyone else? Before making that commitment, before permanently hitching their wagons to one another’s stars, shouldn’t they at least try living together?

Cohabitation has “increased by more than 900 percent in the past 50 years,” according to the Council on Contemporary Families. In April 2017, the Pew Research Center reported that 8.9 million adults ages 18 to 34 lived together in 2016, an increase of 29 percent over 2007, when 7.2 million adults in this age range lived together.

Doing so can be seen as both convenient and practical: shared rent and living expenses enable both partners to save money at a time when, as young adults, those expenses loom large. Yet in a 2016 survey from Barna Group, the most common reason given for cohabiting—at 84 percent—was its power to foretell partner compatibility.

An accurate prediction here has great appeal. Despite some counterarguments, many people still believe—and the American Psychological Association still states—that 40 to 50 percent of all marriages end in divorce—a deeply painful experience, full of complex and hurtful realities that can last a lifetime. Roxanne Stone, editor in chief of Barna Group, explains that many young people today recognize marriage as risk: “They want to make sure they get it right and to avoid the heartbreak they witnessed in the lives of their parents or their friends’ parents.”

So, rather than making a firm commitment, couples simply live together. In May 2016, the Huffington Post sifted new research that claims living together provides as much emotional contentment as marriage. Problems arise, according to Happily Unmarried author John Curtis, when couples fail to discuss their expectations for living together, as partners often have different visions for the relationship’s future.

But the same article also notes some of the risks. Author Terry Gaspard cites more research from the Rand Corporation, which finds that cohabiting partners “report lower levels of complete commitment than those who are married ... especially if they are males.” Moreover, she says that “cohabiting relationships are associated with lower levels of reported closeness, love, and satisfaction in the intimacy dimension.”

Perhaps this is due to that lack of commitment. Is it possible to be fully emotionally intimate with someone who leaves the proverbial door propped open, maintaining their means to leave? As Claire Cain Miller observed in The New York Times in September, “American couples who live together but don’t marry are generally less likely to stay committed.”

Christ’s words in Matthew 19:5–6 are striking. He quotes that famous sentence about marriage from Genesis 2 and goes on to amplify it: “‘For this reason a man will leave his father and mother and be united to his wife, and the two will become one flesh.’ So they are no longer two, but one flesh. Therefore, what God has joined together, let no one separate.”

I believe that Jesus is not merely commenting here on marriage but on the emotional bond that comes with sexual intimacy. Separating two after they have become one is nothing short of a rending, with pain and loss that extend far beyond the tangible. Promoting sexual satisfaction absent commitment or encouraging personal and practical achievement above emotional well-being means that many experience that rending repeatedly and with multiple partners throughout their young-adult and adult lives.

By contrast, early marriage (should one find the right partner) can provide the emotional nexus foundational to a healthy adulthood. My husband and I know this from experience. He was 23 and I was 20 when we married; I still had another year of college ahead of me. We traveled, went to graduate school, lived on little money, learned how to fight and resolve arguments. And when financial disaster hit in our 30s and early 40s, we already had a decade of life and experience together.

We could have asked our children to wait in the interest of gaining life experience and hoped-for security. But none of us can safeguard our lives from disaster. And our greatest safety will come in obedience to our loving heavenly Father, whose law takes into compass every aspect of our selves, from our sex drive to our bank accounts to our emotional health.

We blessed and encouraged our son and daughter-in-law’s young marriage because we believed it was best for them. Sociologist Bradford Wilcox said it well here in Christianity Today: “We are more likely to flourish when we live lives marked by generosity and by deep and abiding ties to other people. And of course these two things are more likely to happen in the married context as compared to other contexts.”

In July 2017, we watched our children form an abiding tie between themselves and God. We know the road ahead of them will be good. We also know it will be difficult. And we couldn’t be happier for them.

Rebecca Brewster Stevenson writes in Durham, North Carolina, where she lives with her husband and children. She is author of the novel Healing Maddie Brees.

Join the conversation on Facebook
Tags:
AbstinenceCohabitationMarriageMillennialsParentingSex and Sexuality
Posted:February 26, 2018