How gospel truth and global perspective free us from guilt-inducing expectations. 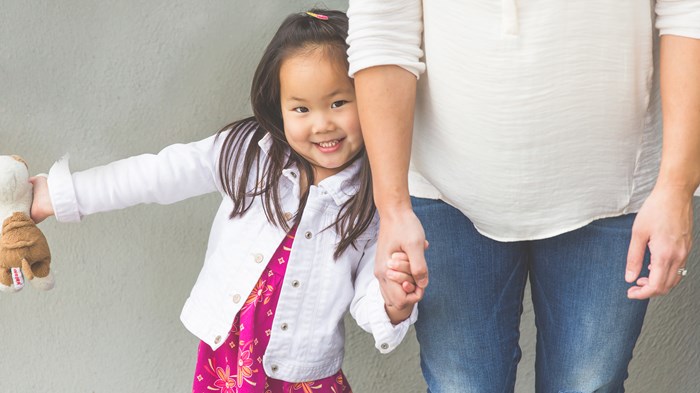 Guilty feelings are common among mothers of my generation. We’ve come to the parenting task at a time when so-called “attachment theory” is common parlance. It’s being applied everywhere from inner-city preschools to executive coaching programs, according to The New York Times. For many of us, it’s a source of tremendous pressure.

According to attachment theorists, the quality of the early bond formed between children and their primary caregivers (usually mothers) influences emotional wellbeing for life. In response, many of us try to put into practice all the expert findings—how skin-to-skin contact at birth promotes bonding or how exclusive breastfeeding up until six months is best. Then we drive ourselves crazy with the possibility that we’re not getting it right and that all the missed moments will add up to a lifetime of emotional insecurity for our kids. (It’s worth noting that experts distinguish between official attachment theory and the pressures of attachment parenting.)

Some of my friends and I commiserate over our mom failures—and the expectations we feel to reach “attachment perfection.” All in all, we’re left wondering: Has parenting always been this hard? Is our intense contemporary approach the only way to parent well? And how does the gospel speak into our mothering angst?

Anthropologists Robert and Sarah LeVine have studied parenting in different parts of the world for decades. In their recent book Do Parents Matter?: Why Japanese Babies Sleep Soundly, Mexican Siblings Don’t Fight, and American Families Should Just Relax, they conclude that, although parenting has taken on vastly varied forms throughout history and across different societies, kids generally turn out alright. They also argue that attachment theory is not purely evidence-based science, as experts claim, but rather the product of a very particular cultural moment.

In the 1950s and ’60s, the public was obsessed with psychological trauma from childhood (courtesy of Freud and his followers) and parents were reacting to the rigidity of their own upbringing. In this era, John Bowlby and Mary Ainsworth put forth their model of infant attachment, with Bowlby stating that “mother-love is as important for mental health as are vitamins and proteins for physical health.” The connection between mental health and a mother’s care was so emphasized that mothers were sometimes blamed not just for minor neuroses but for serious disorders like schizophrenia and autism.

Since its inception, the theory has spread through popular media and parenting books, in particular, The Baby Book by William Sears. As a recent Time article describes, Sears and his wife criticize the “crying it out” sleep method and caution that excessive crying over prolonged periods can damage an infant’s brain. The science behind these warnings has since been challenged, but countless mothers, including me, are left with remnant anxiety.

In recent decades, another wave of “natural parenting” has fused to attachment theory. Parents often see the problems of our tech-rich, socially isolated society and hearken back to an idealized past, when, we assume, things were better. People ate pure foods, lived in interdependent groups, and took better care of their children. Some parents look to existing indigenous tribes as examples. By now, being an “attachment parent” has come to include not only emotional sensitivity but also practices common in premodern societies, like extended breastfeeding, baby carrying, and cosleeping.

Certainly, attachment parenting has a lot to offer (I’m on board with many of its tenets). As Erica Komisar shared recently with CT, we have a “sacred obligation to love [our] children,” and that means being attentive to child-parent bonding. But the attachment approach is often touted as the only way and practiced with an all-or-nothing zeal that induces unnecessary maternal angst. The LeVines offer a counterbalance to these common excesses.

In their opinion, practices that seem traumatic, abusive, or at least adverse to our contemporary sensibilities have still produced generations of emotionally stable, well-adjusted adults. In the Hausa tribe of West Africa, for example, mothers don’t make eye contact or speak with their oldest child, following the custom of kin avoidance. In the case of fostering, which is practiced in different countries around the globe, children are sent to live with extended family members as early as four months (something I personally experienced as a toddler living in China).

“Parental practices vary much too widely across cultures for us to accept uncritically the supposition that the mental health of American children is being put at risk by ‘insensitive’ infant care,” the LeVines write. These observations should force us to question whether our current standards for good parenting, based primarily in Western psychology, are in fact universal.

In my own struggle to make sense of parenting theories and the attending expectations, I’ve finally embraced the freeing realization that there is no single right way to be a mother. Like the parents in the LeVines’ book, we all come to parenting with a unique set of cultural tools and practical circumstances. I bring my experiences being raised by an exacting, protective Chinese mother. I parent in middle-class America where plenty of paid childcare is available but few opportunities exist for shared, communal child-rearing. I do my best with the resources I have.

But I recognize now that “doing my best” does not necessarily mean sacrificing all of my time, energy, and desires for my children. Sacrifice is often the takeaway from both attachment teaching as well as some faith-based instruction on motherhood. Certainly, sacrifice is a crucial part of God’s call to mothers. But when we define Christian parenthood only by that metric, it suggests that the more we sacrifice, the better our kids will turn out. We veer toward the fallacy that the right Christian parenting techniques produce godly children. We also miss out on a chance to present a fuller, more compelling vision of the gospel to the world.

The gospel speaks of a kingdom economy where each person’s flourishing is connected with another’s and also with the flourishing of the entire community (Jeremiah 29:7). Shane Claiborne describes life in God’s economy as “being in a big family with a parent with a big wallet.” There are no losers and winners in this economy; everyone is included and everyone has enough. While Claiborne critiques consumerism and the economics of scarcity, his ideas also apply to the sphere of parenting.

We often think of parenting as a zero-sum game. “It feels like [my kids’] amazing life comes at the expense of my own,” says one mother candidly. In God’s economy, however, when I give to my children to the point where I feel I am “losing” something of myself, I can trust that it’s not being lost but rather refined and distilled. The bone-tiring work of motherhood forms and sanctifies my heart so that it more closely resembles God’s. It also draws out creativity, grit, and a sense of humor that informs my faith, work, and life. My children’s flourishing is part of my flourishing.

On the flip side, my flourishing is also part of my children’s flourishing. When I take time away from them to nurture the wellsprings of my own life—exercising, feeding my marriage, practicing silence and solitude—they benefit. They learn to see me as a whole person, a woman seeking to integrate her callings as writer, wife, justice-bearer and peace-maker, and mother.

Finally, and perhaps most importantly, they discover that they’re part of a family beyond our immediate one and that “other mothers” can meet their needs, as well. Our family’s flourishing is part of the world’s flourishing. My husband, two boys, and I are not a closed system where we only exist for and draw sustenance from each other. We depend on grandparents, Sunday school teachers, neighbors, bus drivers, and many others to weave a fabric of wellbeing, a sense that we will be loved and cared for, even if the bottom falls out. In turn, we hope to weave that fabric for others, especially the most needy and vulnerable in our community.

If the LeVines are right, then I am free to agonize less about “never giving enough” to my kids. I’m free to listen to God’s unique call to me as a mother, rather than squeeze into a predetermined mold. And I’m free to “hold the tension creatively” (to paraphrase Parker Palmer) between my needs and my children’s, trusting that they don’t have to cancel each other out.

In the end, I believe that my children will feel secure and beloved, not because I was always emotionally sensitive and perfectly present, but because we are all caught up in a bigger gospel story of search, rescue, and redemption. I know Christ’s love—and his body—surrounds my children. He is there, even when I am not.

Join the conversation on Facebook
Tags:
AnxietyChildrenMotherhoodParentingWork and Workplace
Posted:March 20, 2018