Code 46 begins with a premise that asks serious questions about the destiny of human beings in a world where science can customize the image of God.

The film's story takes place in a not-too-distant future, where people have been gene-spliced and cloned like purebred dogs for specific, desirable features. The divine chaos that makes us all so different has been reigned in. With everyone seeking the same admired traits, the gene pool has shrunk, yielding a bizarre twist: Since most people are born in vitro, nobody really knows who their closest blood relatives are. Hence, a person could fall in love and enter into an incestuous relationship without knowing it.

That's where the film's title comes in. Code 46 is a law that makes conception illegal for any couple who are more than 25% related. Any pregnancy found in violation of the law is terminated. Anyone who knowingly procreates in such a manner has broken the law. If they did it unknowingly, "intervention is authorized to prevent any further breach of Code 46." Easier said than done. In society today, people can avoid incest because they know who their relatives are. But in the world of Code 46, people from separate continents could be as closely related as cousins or siblings.

Part of the inspiration for Code 46 came from the Greek myth of Oedipus. The oracle warned that Oedipus would kill his father and marry his mother, so he was sent far away to be raised outside of his family. He became a great warrior, and when he killed an adversary in battle and married his wife, he did not know they were his mom and dad. He broke the taboo innocently, but he still paid for it. The same possibilities permeate the world of Code 46, where one can easily "break the taboo innocently." ... 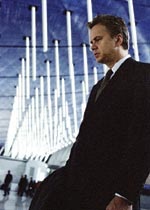