Closer, the new film from Mike Nichols (Who's Afraid of Virginia Woolf?, The Graduate), has a lot in common with the "smoker's lung" billboard.

You know the one—there's a cigarette in the left frame, and a blackened, diseased lung on the right. It's a troubling image. You're driving along sipping coffee or tea, you see the picture, and you choke. Nobody wants to see such ugliness. But it works. Sometimes. Especially for young people. That nauseating image of rotten tissue is enough to make a few of them say, "Not in my chest cavity!" It exposes the glamour of cigarettes as a lie, a short-term, feel-good rush that leads to long-term heartache.

Closer works like that. But it's not about smoking—it's about unfaithfulness. And instead of showing us ruined lungs, it exposes ruined hearts. Instead of disintegrating organs, we see souls sickened from dishonesty, anger, hate, emotional violence, grief, loss, and loneliness.

How interesting that Closer arrives while Bill Condon's film Kinsey is still in theatres. Kinsey celebrates the "scientist" who told the 1960s to stop thinking about sex in a restrictive moral framework, and to enjoy it in any way we please. After all, we're animals, and sex is "animal behavior." Closer contradicts this, suggesting that when people behave like animals, adhering only to their base desires and self-centered impulses instead of to conscience, morality, and promises, they end up lacking the blessings that human beings have the capability to enjoy. Closer—like We Don't Live Here Anymore, 2004's other "adultery film"—demonstrates that saying "It feels good, so it must be okay" leads to a relentless, heart-hardening search for satisfaction. 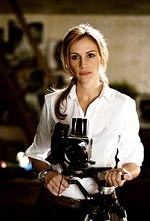