Long before the horrendous day we now simply remember as 9/11, there was another tragic September 11.

On that date in 1857, a wagon train of 120 emigrants bound for California was slaughtered under a white flag, apparently by Utah Mormons. In his documentary, Burying the Past: Legacy of the Mountain Meadows Massacre, director Brian Patrick investigates the incident—and demonstrates that, contrary to the old adage, time does not heal all wounds.

The Mountain Meadows Massacre was the worst massacre of Americans by Americans until the 1995 Oklahoma City bombing. In September of 1857, nearly 140 members of the Fancher-Baker wagon train left Arkansas en route to California—and through Utah at a time of extraordinary tension and mistrust between Brigham Young's Mormon territorial authority and the federal government.

For reasons that are still unclear, after a six-day siege by a group of Mormons dressed as Indians, all but 17 small children were killed in cold blood after they were lured by a white flag and promise of a settlement. The two wagonloads of children who survived were adopted into Mormon homes until they were recaptured by the U.S. Army and returned to their families in 1859.

Using black-and-white re-enactments, a young girl's first-person account, and interviews with historians, Patrick builds a convincing case that full responsibility for the massacre lies with the Mormon militia under the orders of their leader, Brigham Young. To this day, however, the Mormon Church blames the Indians who lived in the area, along with another Mormon man, John D. Lee, who became the designated scapegoat and was executed 20 years after the massacre.

Patrick, a professor of film studies at the University of Utah, took six years ... 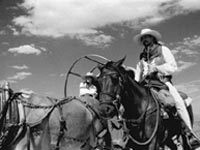