The Clearing starts out like a thriller, but it is far from thrilling. Pieter Jan Brugge's directorial debut is watchable only for its talented cast, a trio of formidable actors who make you wonder what drew them to this particular script. It's a kidnapping yarn that raises a lot of interesting questions and suggests myriad possibilities for conspiracy and surprise, only to cast off those concerns entirely. It ends by slumping into the territory of simple morality plays—you know the kind, where the captive rich man suddenly learns that a few of his priorities are out of whack.

Brugge, who served as producer for Michael Mann's edgy thrillers The Insider and Heat, deals with some heavy ethical concerns here, and he's got a lineup of seasoned actors who make the most of uncomfortable silences and emotional outbursts. But the script by newcomer Justin Haythe feels like a rough draft. The characters lack distinctive voices, fitting the typical clichés of the rich businessman (Robert Redford, Spy Game), the businessman's imperious wife (Helen Mirren of Gosford Park), and the grudge-bearing ex-employee (Willem Dafoe, Spider-Man).

It is difficult to discuss the plot without "spoiling" what few pedestrian "surprises" it bears—but here is a restrained summary: Wealthy car-rental-business pioneer Wayne Hayes is kidnapped from the driveway of his suburban Pittsburgh home by an amateur criminal named Arnold, leaving his resourceful homemaker wife Eileen to fret over the crisis. The grown children (Alessandro Nivolo and Melissa Sagemiller) come home to furrow their brows over the scarcity of clues, and an FBI agent (Mike Pniewski) moves in to enjoy Eileen's hospitality and muse over the identity of the kidnapper. Meanwhile, ... 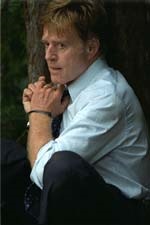