Well, not quite. But the normally crass writer/director toned it down for Jersey Girl, where the young father wears his heart on his sleeve.
by Jeffrey Overstreet |March 26, 2004

Not long ago, moviegoers were stunned by a filmmaker's strong religious convictions unapologetically manifested on the big screen. The media buzzed with controversy. Religious audiences voiced both praise and protest. Others considered it healthy to challenge audiences that don't consider Christianity a worthwhile subject.

The movie was Dogma. The year was 1999. And the filmmaker was Kevin Smith.

Smith's first three films—Mallrats, Clerks, and Chasing Amy—gave no indication he was headed for a movie full of frank talk about sex, relationships, and Christianity. Sex and relationships, sure—they were the focus of the previous films. But a crass and belligerent comedy about how American Catholicism has lost touch with the public? Featuring demons who argue over interpretations of Scripture? The temperamental forgotten black disciple? An abortion doctor called to serve God? Huh?

Smith may not be most profound theologian of his time, and his profanity-laced treatise offended many evangelicals. Nevertheless, Dogma landed some stinging blows against the soft "buddy Christ" at the heart of mainstream America's easy-listening gospel. Smith's foul-mouthed and amateurish film reflected the growing interest in spiritual matters among young people and their willingness to join the ring of religious dialogue.

So when smith visited Seattle recently to promote his new film, Jersey Girl, I couldn't resist asking him about another recent religious movie—The Passion of The Christ. I joined two other journalists to chat with him about The Passion, his Catholic upbringing, and, of course, Jersey Girl—which, despite crass behavior and language typical of Smith's films, includes a surprisingly moral and meaningful lesson. ... 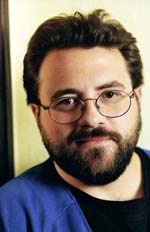