Editor's note: Andree Farias was among the journalists at the May 16 launch of The ONE Campaign in Philadelphia. The event featured U2 frontman Bono and other celebrities at what was billed as a rally to raise awareness of the emergency of AIDS and extreme poverty in Africa and the world's poorest countries. Here's Farias' account of meeting the rocker at a press conference before the rally.

PHILADELPHIA — Bono had the stage, so to speak, and I was closer than a front row seat.

I could've shaken his hand, if I'd wanted to. Nobody could've stopped me, not even the countless media outlets, their intimidating boom mics, or—in the case of local TV personalities—their slicked-back hairstyles.

The pressroom definitely allowed for that kind of physical contact. It wasn't indoors, but on a second-floor terrace, only yards away from hordes of fawning, overzealous fans who knew little about the occasion other than that their favorite frontman was about to give "some speech about AIDS."

The Irish demigod was supposed to meet the press between 1:30 and 2 P.M., a time slot I deeply resented in light of the daunting task that is finding parking on the narrow streets of Philadelphia.

The minute I arrived, I was surprised at how behind schedule everything was. Crowd size in front of Independence Mall was only in the hundreds, and for a moment it seemed that concession tables and other humanitarian organizations at the scene were more aware of the event than the actual general public. Even members of the press—radio, print, and Fox News, among others—seemed more abreast of what was about to transpire than Philly locals.

Considering Bono's imminent advent, I was surprised by the laxity of it all. Just seconds prior ... 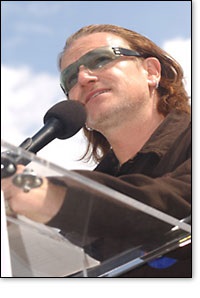