Scriptwriter and Calvin College grad Geert Heetebrij just released his first full-length film, a delightful romantic comedy called A Foreign Affair. We recently talked with him about the movie.
by Mark Moring |May 18, 2004

Every now and then we hear about a movie that's "off the radar screen" but turns out to be a gem. Such is the case with A Foreign Affair, a quirky but fun independent film that opened last week in just three cities: Los Angeles, Phoenix, and—get this—Grand Rapids, Michigan. All three make perfect sense.

L.A. makes sense, as the movie capital of the world.

Phoenix makes sense, as the home of A Foreign Affair, a company that takes American men on "romance tours" of Russia in search of potential brides. Apparently works; the website boasts: "We average more than seven engagements a day."

And Grand Rapids makes sense, because the film's scriptwriter, Geert Heetebrij, is a 1993 graduate of that town's Calvin College.

A Foreign Affair, Heetebrij's first full-length feature, is a romantic comedy about two 30-something brothers—Jake (Tim Blake Nelson of O Brother Where Art Thou) and Josh (David Arquette of Scream) live with their mom on the family farm. When Mom dies, the sons realize they're clueless when it comes to cooking, cleaning, and keeping house. So they decide they need a wife—yes, a wife, singular, not plural. And they end up on this romance tour to Russia in search of the perfect woman—Jake, the logical, measured (and anal retentive) big brother with his list of criteria for interviewing prospects, and Josh, the sweet, shy, little brother who suddenly transforms from a homebody into an outgoing playboy while on the tour.

Hilarity ensues, but this film is much more than just a comedy. It's a poignant look at sibling relationships and the mysteries of romantic love. Ebert & Roeper both gave it thumbs-up, and it was well-received at the Sundance Film Festival last year, where one critic called it ... 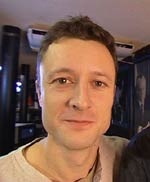