I ♥ Huckabees is "all about what it's all about." At least, that's what the studio's summary of David O. Russell's fourth film boasts. If that means that the movie asks, "What's it all about?"… they're correct. We haven't seen a movie so intent on uncovering the meaning of life since Richard Linklater's Waking Life. But anybody who claims Huckabees delivers a satisfactory definition of life's meaning is sorely mistaken.

Although widely varied in style, Russell's films explore what unites humankind and what draws people out of their narrow-minded boxes. In Flirting with Disaster, Ben Stiller plays a desperate man searching for the family that gave him up for adoption. Over and over, he "finds" his family and begins bonding, only to find out there's been a mistake, and he has to tear himself away. It's all played for laughs, but on a deeper level the film is about how interconnected we are, even with total strangers. Although Russell's war film Three Kings was much more serious, it too was about human unity; U.S. soldiers in the Gulf War came to realize that the struggle was not as clear cut as they'd assumed, and through a terrifying hostage crisis they came to sympathize more deeply with the people whose territory they occupied.

The hero of I ♥ Huckabees is not trying to find a family; he's trying to find a satisfying worldview. And while his relational barrier is not an international divide, he does learn how much he has in common with his enemy, a corporate executive with a mean streak.

Albert Markovski (Rushmore's Jason Schwartzman) is a defender of "open spaces," an environmentalist, and a poet. But for a guy who's passionate about poetry and a clean environment, he sure has a filthy mouth! He vents ... 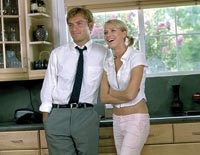